Initially, there’s a lot to enjoy in Enola (‘alone’ spelt backwards). She’s raised by her rebellious suffragette mother Eudoria – all too briefly played by Helena Bonham Carter – to be a literate, athletic, self-sufficient young woman.

After 16 years spent inside a country house, smothered by plant life, she has little experience of the outside world. The notions and expectations of being a ‘lady’ in 19th-century Britain are quite alien to her, and she never skips an opportunity to mock them. When her mother suddenly disappears, Enola faces this patriarchal system when she travels to London – seeking Eudoria via anagrammatic codes. 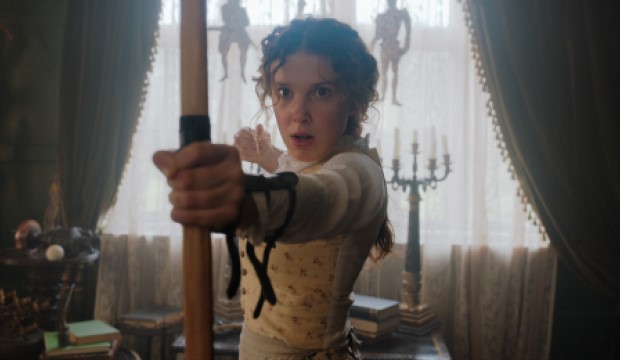 Enola’s vivacity, her charisma, her obstinacy are infectious, especially as she talks directly to camera. These electric asides could’ve been drab and clichéd in the wrong hands, but in those of Fleabag director Harry Bradbeer they whisk you along for the adventure. She relays her story, confiding to you the emotions she’d rather keep hidden: affection, annoyance, even a cheeky wink to camera saying don’t worry, she’s got this. The film begins with such ecstatic confidence.

The story becomes muddled as the pompous but adorable Viscount Tewksbury, the Marquis of Basilwether (Louis Partridge), quite literally falls into Enola’s life. Their dynamic runs with fun, Enola constantly see-sawing between being impressed by him and being irritated by his existence.

They’re entertaining enough, with a very cute chemistry, but the appeal begins to collapse when he’s prioritised over Eudoria. He’s wrapped in a conspiracy plot that Enola tries to solve, the film stretching needlessly to two hours in length. Because of this overly long runtime, the energy Bobby brings to the role is sapped slightly. 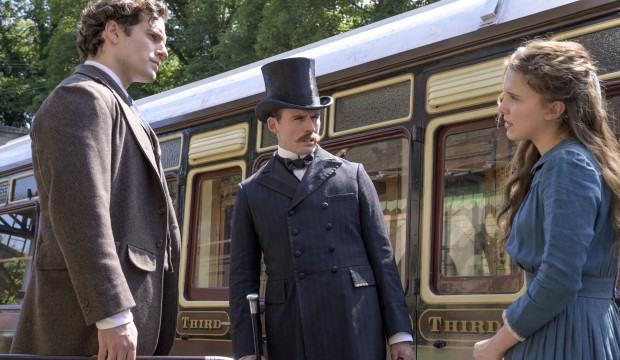 Although the plot plods along after losing itself, at least Enola carries you through. The early feminist context, though underwritten, gives greater heroism to the heroine. Enola's greatest antagonist, other than a bowler-hatted assassin, is Mycroft. He appears as a cartoonish conservative who sneers at feminism. His first reaction to seeing his sister for the first time in years is ‘You’re in such a mess… Where’s your hat and your gloves?’

Sam Claflin resumes his streak of playing aggressive, prejudiced gentlemen (Peaky Blinders, The Nightingale) and, surprisingly, delivers a similar thunder to this role. Sherlock is mostly passive, but Henry Cavill brings a deeper humanity than seen in many other depictions. The character’s trademark analytical personality is turned down and his emotions are turned up, which is the subject of a bizarre lawsuit by the Conan Doyle Estate.

Writer Jack Thorne (His Dark Materials) connects the story to this context with a very thin, very weak string. And yet the most powerful dialogues in the film are political, discussing topics that are still depressingly relevant. Although Enola Holmes is a slight disappointment, the heart of this critic fills at the idea of young girls and boys being inspired by its messages.

Enola Holmes is available on Netflix from Wednesday 23 September