In Charlie Kaufman's new Netflix movie, Jake (Jesse Plemons) and his girlfriend (Jessie Buckley) visit his parents (David Thewlis and Toni Collette). But his girlfriend is having doubts...

Since Being John Malkovich in 1999, writer/director Charlie Kaufman has grappled with awkward, anxious protagonists (almost always male) as they navigate surreal worlds that orbit deep philosophical concepts like life, death, memory, reality, identity, and time. After leaving these worlds, your mind feels stretched like taffy through a labyrinth – not only from tangled narratives, but the confusing and existential toil he imposes on his characters.

But Kaufman tends to avoid pulling too hard (if at all) on emotional heartstrings. It’s rare to tear up at a Kaufman movie. His latest film I’m Thinking of Ending Things, however, made this awkward, anxious critic cry – and it’s hard to say why. 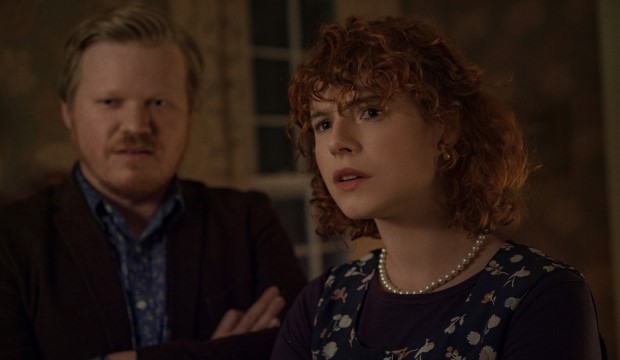 The film, adapted from the debut novel by Iain Reid, tracks a relationship on the rocks. Jessie Buckley (Chernobyl, Wild Rose) plays Kaufman’s first female lead in a movie, credited as ‘Young Woman’, as she embarks on a road trip with her six-week boyfriend Jake (Jesse Plemons). They’re driving to visit his family farm and meet his parents.

Most of the film is watered with her stream of melancholy thoughts, always returning to ‘I’m thinking of ending things’. This thought dominates all the others – in her words: ‘It’s there when I eat, when I go to bed. It’s there when I sleep, it’s there when I wake up. It’s always there. Always’. Her interior anguish plagues every line in her mind, and it’s in danger of slipping out.

Their car journey is filled with snow and slow conversation. They both scramble for topics. Despite the story moving into a weird direction, these scenes push with a natural rhythm. Jake and his girlfriend are familiar with each other, but they’re dialogues still plod along with difficulty. That romantic connection is still unformed. 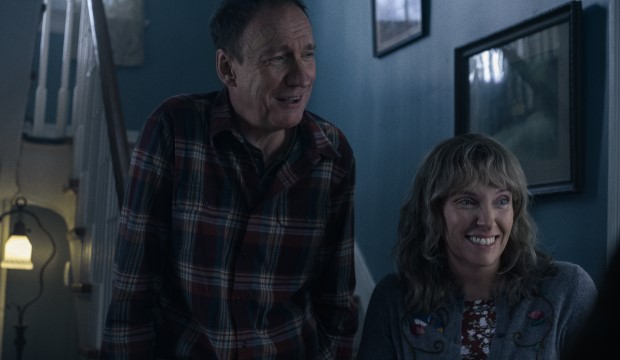 Entering the family home – a small abode in a white desert of nothing – is akin to entering a horror movie. But these ghosts don’t go bump in the night: they come with smiles, with a confused sense of time that moves quickly and backwards and forwards. A dog shakes too much. A basement door is taped shut. A framed photograph hangs on the wall, and it may or may not be of the Young Woman. And then: the parents. They’re played with uneasy charm by Toni Collette and David Thewlis, the fear and tension rising from their son’s embarrassment.

I’m Thinking of Ending Things creeps with a slow, quiet sense of terror. As Kaufman has explored before, time follows its own rules and the Young Woman has trouble keeping up. She could be with the family one moment and in the next, they can disappear. Reality peels away like dusty adhesive on a cheap sticky note.

This leads into the baffling yet visually explanatory final act, ambiguously built via a tired high-school janitor (Guy Boyd) – striking the tragic, balletic chord that moved this critic to tears. 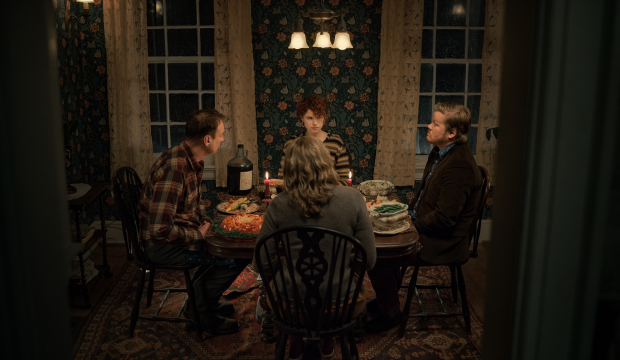 It’s pointless and deflating to attempt an explanation for I’m Thinking of Ending Things, but the common theme is one of control and desire for control. The film’s 4:3 Academy ratio framing (the standard in Hollywood’s Golden Age) is composed by Cold War cinematographer Lukasz Zal, and speaks to that sense of rigid command. It’s constrictive; vividly unreal.

It may affect people in different ways, and some anti-absurdists will hate the ambiguity, but Kaufman creates another bleak and brilliant world stuffed with ennui and regret. I’m Thinking of Ending Things is a surreal, romantic tragedy; a shattered pattern of melting possibilities. It's one of the most unnerving films of the year.