Rocks film review 4 Rocks film review Ella Kemp
It’s strange to feel pride when watching a social realist drama, a genre that usually highlights the underprivileged in society. So why is it the case with Rocks? Simply: London. The people, the differences, the similarities, the overall cosmopolitanism. Since lockdown, the capital city has been a no-go area for many outside its borders – hopefully this film will bring them back.

The group of teenage girls in Rocks is made up of many cultural backgrounds: Nigerian, Somali, Congolese-Ghanaian, Bangladeshi, Polish and English. But, ultimately, they’re all British. They show the city’s diversity: various races and traditions and languages washing together in a mostly warm confluence.

Where a more political movie like Spike Lee’s Do the Right Thing would use multicultural characters to show division, Rocks unites them. As we continue enduring the loop of tighter and looser restrictions, as well as the never-ending Brexit limbo, this film shows how wonderfully inclusive London can be. And should continue to be. 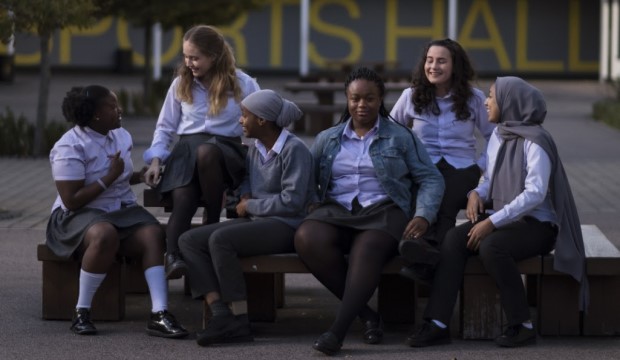 Shola (Bukky Bakray), nicknamed ‘Rocks’, is a Nigerian girl who lives in a Hackney council flat with her mentally ill mother (Layo-Christina Akinlude) and spirited brother Emmanuel (D’angelou Osei Kissiedu). When her mother suddenly leaves without a trace, she has to look after Emmanuel – narrowly avoiding social services. She can’t risk being split from him. They hop across east London, staying at friends' houses and a tacky hotel, with a barely formed idea of a plan.

Using a Mike Leigh-ish development process, director Sarah Gavron and writers Theresa Ikoko and Claire Wilson moulded their film from extensive workshops with non-professional actors. Although casting and writing in such a way can often permit poorer performances, under the excuse of ‘realism’, every character in Rocks squeals and shouts and chuckles with reality. All the more so considering its mostly female cast and crew, providing a more honest look at modern female adolescence.

The atmosphere looks and sounds familial as a result: you're convinced these teenage girls are friends off-screen. There are moments when Rocks and her friends chat to each other – melding topics like Picasso and Auschwitz – where the dialogue has a freeform, documentary naturalism. You wonder: is it the characters or the actors having this discussion? It’s honestly hard to tell. Gavron sticks close to these girls, starting and ending the film in their hands as they Snapchat their whereabouts.

Ikoko and Wilson also don’t shackle themselves to Rocks’ troubles. They leave room for her day-to-day life: hanging with her clique, relishing school food fights, and doing girls’ make-up. She befriends a new girl from Nottingham who dabbles in petty crime, using her as a thrilling escape. Rocks doesn’t want to deal with big issues, wrapping her hidden anxieties with aggressive deflection. She refuses help from anyone, even her mates, but you understand the upsetting pressure she's under.

The film leads to its inevitable, crushing conclusion. It’s shot so simply, filled with overwhelming hopelessness. Gavron doesn’t wallow in the misery – she’s not Ken Loach – but Rocks’ friends offer a cure. And although this critic craved more scenes of them simply talking, arguing and laughing, the love between them pulses till the end.

Rocks is released in UK cinemas on Friday 18 September. It's now available on Netflix.