Sam (Jude Law) spends yet another day on Osea Island, learning more about its folklore and becoming closer to anthropologist Jess (Katherine Waterston)

These reactions compliment the immersive experience that writer Dennis Kelly and director Mark Munden want to achieve with theatre company Punchdrunk. Episode two proceeds deeper into its spiky strangeness: ramping up the paranoia, the hallucinations, and the Druidic folklore of Osea Island. Although the plot stumbles into some very familiar folk-horror tropes, it’s impossible to know where you will end up. 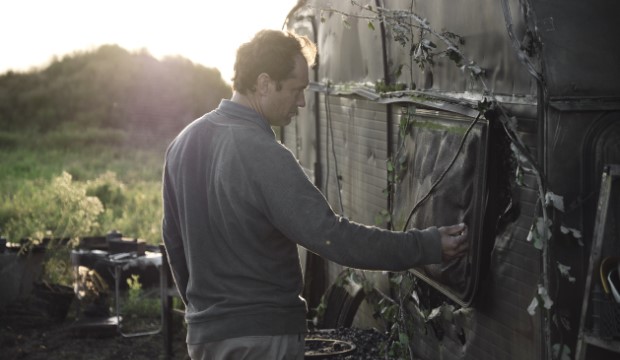 Sam (Jude Law) is caught between dreams and reality

The episode begins in the thick of a dream, Sam (Jude Law) rushing after that ominous child like the red-coated, dead daughter in Don’t Look Now. He finds a flaming caravan, and gets so close that his skin begins to burn. He awakes, relieved to be back in reality… until he sees the anthropologist Jess (Katherine Waterston) lying naked next to him.

It’s a funny confrontation, despite the unfaithfulness (‘We fucked, didn’t we…’) – rare in weird dramas that want you to be on edge all the time. The two become closer, touching each other’s histories, embracing their personal griefs and traumas.

Certain details of the island’s mythology trickle into Sam’s awareness, its violence appearing in the most mundane of places. On the menus at The Oyster, the Martins’ pub where Sam is staying, Christ is drawn hanging from a noose.

Jess assures him, in an uncomfortable tone of acceptance, that Osea’s traditions are no less crazy than crystals or Catholicism. He witnesses confusing rituals with an ecstatic congregation, praying and shouting according to the words of a manic preacher. You learn more about the local religion: a trinity of different gods, one of which is Osea's primary icon of worship.

Kelly presents this information thick and fast – a helpful blur in a bigger, scarier mirage-on-the-sea. He pursues a more psychological route through this forest of perplexity, revealing just enough to make interpretation exciting. Even as Sam tries to leave he’s tempted by Osea’s isolation, removed from the real world. 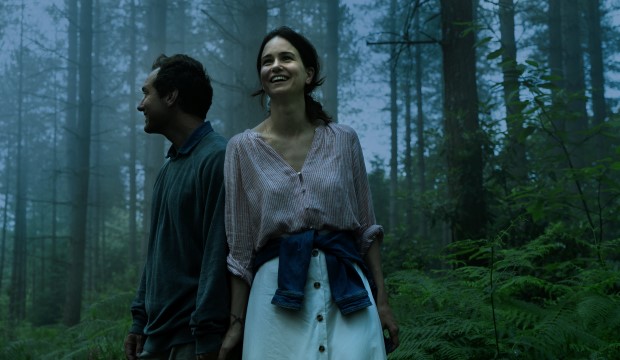 Like the Overlook Hotel in The Shining, the island is a malevolent character as much as an eerie setting. It wants you to stay. It needs you to stay. Although Mr and Mrs Martin (Paddy Considine and Emily Watson) facilitate Sam’s continued residence there – not waking him for the opening causeway, finding easy solutions to his threatening paranoia – it’s like they’re commanded by the island itself.

Although Sam supposedly wakes from a dream at the start, the somnambulance never stops. Visions from his sleep become tangible. Simon Smith’s editing shudders and shakes into new places, capturing the disorientation of a dream state. Sam appears rather than travels, leading into a psychedelic drug scene that floats into terrifying surrealism. Logic melts into a ritual fire.

None of this would be gripping without its detailed characters, shown as Sam mines his fraught past: remembering his son’s death. Every image, sound and note of music cater utterly to his bleak experience – often in extremely shallow focus, where exiting characters become distant spectres. Sam talks about his loss, showing Jude Law’s power as an actor. He keeps a heavy smile despite the grief that stabbed a hole in his soul.

This episode pulls you into a baffling tide, thick enough to drown the disinterested. But hopefully, they’ll risk those waves of confusion for Sam. Despite the surreal nature of the series, its emotional side is just as powerful.