In the opening episode of series two, plunging Philip Pullman's The Subtle Knife, Lyra (Dafne Keen) and Will (Amir Wilson) enter the eerie city of Cittagàzze

There was never a more perfect time for fantasy to sweep us away. This critic writes after Joe Biden won the US presidential election, following a long and exhaustive week: a torturous process that required anxious attention to constant news updates. We’ve had our eyes and ears pressed to reality for long enough, which is why the return of the consistently thrilling His Dark Materials is a welcome escape – especially during the opening chapters of Lockdown 2.

This first episode of series two grabs you and flies you to worlds very different from our own. They're now connected after Lord Asriel (James McAvoy) opened a ‘schism’ allowing entry to parallel dimensions. Series one closed as the ferociously enjoyable Lyra (Dafne Keen) walked through Asriel’s portal, clasping her daemon Pantalaimon (Kit Connor) – an external anthropomorphised representation of her conscience and soul – and stepped into the unknown. In doing so, His Dark Materials expands its excellence. 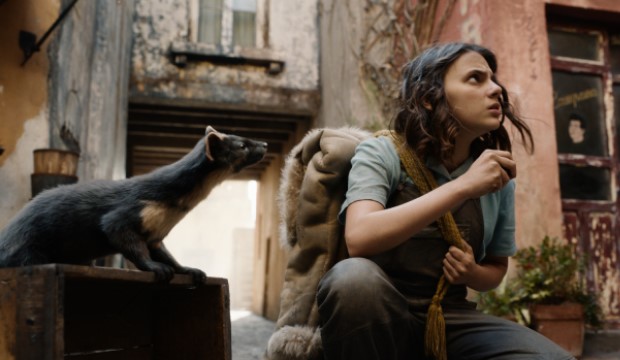 Screenwriter Jack Thorne (CripTales) plunges into the second volume of Philip Pullman’s book trilogy, The Subtle Knife, after teasing it in series one. Lyra and Will Parry (Amir Wilson) finally meet in a world neither of them belong to: in the city of Cittagàzze ('chitta-gat-zee'). Its unforgettable design – perched and elevated on a rocky island attached to a cliff – resembles that of Minas Tirith in The Lord of the Rings film trilogy, only with a more Italian atmosphere.

And it’s creepier too: devoid of any people despite the restaurants, cafés and upturned food stands.

Whereas the book places a deep focus on Will, the series wisely emphasises Lyra. Their meeting is hostile, confused – resulting in some of the finest and funniest dialogues so far on the show. Thorne builds their relationship gradually, giving them room to breathe. It’s a joy to watch it unfold: their personalities delightfully childish and oppositional.

Keen in particular excels with Lyra’s puerility, often shrugging off important matters like showering (‘Ah, fine as I am’). Series one necessarily forced her into maturity, so it’s exceedingly fun to watch her be an independent kid. But they’re not alone in the eerie Cittagàzze. 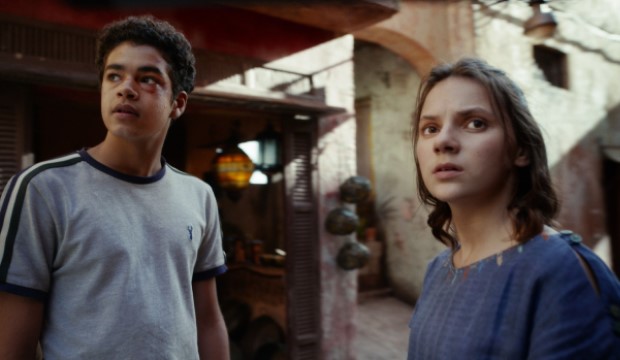 Will (Amir Wilson) and Lyra finally unite in the eerie city of Cittagàzze. Photo: BBC

Meanwhile, the schism in Lyra’s world is turning everyone into soldiers awaiting battle. As the skies are bathed in darkness, the theocratic Magisterium gathers armies of airships and submarines. The large, bald Cardinal Sturrock (Ian Peck) is denying the existence of the schism, despite it shining bright for all to see, much to the chagrin of his bishops.

And then there’s Mrs Coulter (Ruth Wilson), who suddenly materialises out of nowhere like a lethal and fashionable phantom. It’s hard to think of a scarier villain on TV at the moment, containing all the poise and sexual weaponry of an erudite femme fatale, but with a primal evil screaming inside. You have the urge to collapse and weep whenever she enters a room. Wilson plays her with such breathless vivacity, in the series’ most valuable performance.

The witches have also gathered together, with the aëronaut Lee Scorseby (Lin-Manuel Miranda) tagging along. The Latvian witch queen Ruta Skadi (aggressively played by Jade Anouka) flies in, soaring through storm clouds and providing the episode’s key action scenes. They’re preparing to fight an oncoming war.

Series two immediately sets a darker tone for the episodes ahead, which is some achievement considering the holocaustal precedent. Not since the youthful Harry Potter movie days has this critic been so excited for what’s to come in a fantasy meant for children. The epic awe and wonder and sense of adventure is boundless, and its existence during Lockdown 2 is undeniably precious. A comforting daemon in times of woe.

His Dark Materials airs on Sunday 8 November at 8:10pm on BBC One