‘How could anyone be okay?’ says DC Chloe Bishop (Shalom Brune-Franklin) after describing the racist attack of architect Lawrence Christopher, who was subsequently arrested by abusive police officers. It’s a question that’s become louder and louder for nearly a year now, identifying institutional racism within the police.

Despite Line of Duty being an entertaining fantasy of sorts, writer/creator Jed Mercurio likes to reflect the society we’re living in. (He was bold enough to use Jimmy Savile in season three, and then again for season six.) Racism in the police hasn’t been covered with any depth in Line of Duty before, so this could prove curious viewing – especially after Steve McQueen’s revolutionary Small Axe series, Red, White and Blue in particular.

In any case, those realities intensify the episodes as well as create some implicit satire. Did anyone else laugh when the paedophilic ex-copper Patrick Fairbank (George Costigan) entered, leaning on a walking frame like Harvey Weinstein? It makes you wonder if Fairbank is being entirely genuine.

Returning to the fantasy, to the question storming everyone's minds this week: who is DSU Joanne Davidson (Kelly Macdonald) related to? This critic’s money was on the murdered UCO John Corbett (Stephen Graham) from season five, which would've connected with Steph Corbett’s hidden money and Ted Hastings’ guilt.

But no, it’s Tommy Hunter (Brian McCardie): the elusive and frightening crime boss, who in season one blackmailed DCI Tony Gates (Lennie James). Hunter was arrested in the finale, and then assassinated in season two after being hospitalised.

This reveal will make some viewers scratch their aching heads. But Hunter’s connection to Davidson makes her strangled situation even more inescapable, considering how historically embedded she is. She probably didn’t have a choice, either. And with Ryan’s evil eye watching her every move, there’s no way out. 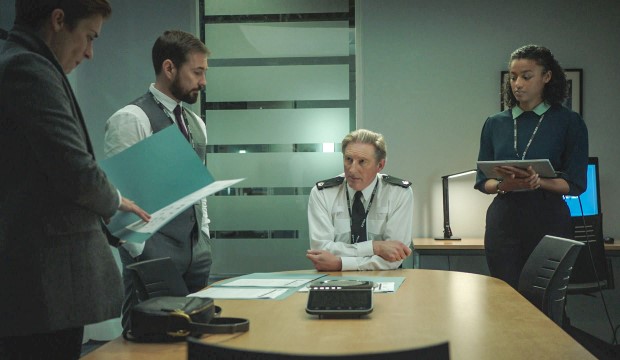 After the thrilling rigmarole between MIT and AC-12, racing between different workshops to catch the OCG, Ted (Adrian Dunbar) decides against bringing Ryan (Gregory Piper) in for questioning (‘we will be left holding a sprat when we shoulda landed a mackerel’). He calls Ryan the ‘new Caddy’: a reference to DI Matthew 'Dott' Cottan (Craig Parkinson), who was also groomed from childhood by the OCG.

The infamous misspelling of ‘definately’ returns in this episode, via Jo's DMs with the OCG. We know Ted has made the same error (but was it intentional?). His letting Ryan loose and giving Steph the undeclared £50,000 and talking to Lee Banks at Blackthorn (leading to John Corbett’s murder) means Ted is looking rather shaky right now. And with the intrusive return of fan-favourite DSU Patricia Carmichael (an excellently stern Anna Maxwell Martin), he’s stuck in a tight space with no diesel to suck. 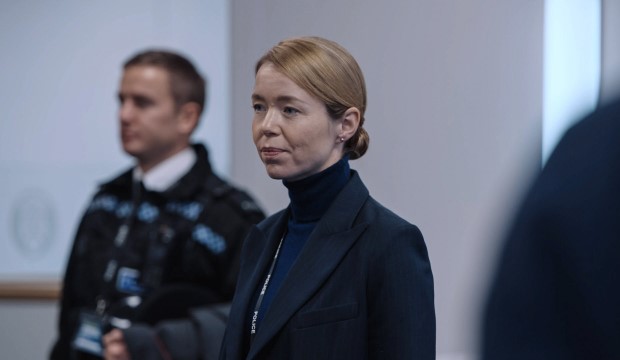 Among all the detail and action and stupendous revelations, including a long-pondered cameo from James Nesbitt (also starring in Bloodlands), episode five builds the distressing idea that DI Kate Fleming (Vicky McClure) could be killed off. Mercurio’s no stranger to executing major characters, not only in Line of Duty but in his other massively popular BBC drama Bodyguard.

This critic was almost certain that Kate would get the chop. And then, of course, the episode intensely cuts to black. Kate and Ryan are left hanging in a week-long stand-off, shouting and pointing their weapons. Two shots are fired, with no indication about where they hit or even who shot them. Did the concerned quartet of Steve (Martin Compston), Ted, Chloe and Patricia make it there in time?

More than brilliant cliffhangers, Mercurio shows (once again) that nobody is safe – not even our favourite characters.