Detective Superintendent Ted Hastings (Adrian Dunbar) is full of idioms this week (‘she’s cooked her goose now’), which means this beloved and motivated copper has found his spirit again.

The first episode of this season saw a deflated version of AC-12, a shadow of its accelerated self. DI Kate Fleming (Vicky McClure) transferred to the Murder Investigation Team (MIT), ironically working for the latest copper suspected of corruption: DCI Joanne Davidson (Kelly Macdonald). The remaining detective Steve Arnott (Martin Compston) is also thinking of moving on; awkward, considering Ted's presumptions of loyalty.

However, this new case has kicked some life into Steve. Hardly surprising, given Joanne's steely intrigue: being wrapped inside many enigmas at once. As such, her mystery is among the most curious that writer/creator Jed Mercurio has crafted for Line of Duty. 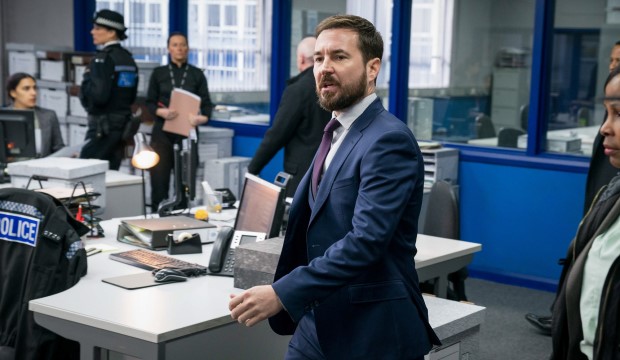 A few supporting characters from season five return, their appearances generating several question marks. John Corbett's widow Steph (Amy De Bhrún) is seen by both Steve and Ted in this episode, for ambiguous reasons. Steve is clearly still harbouring suspicions about his current Gaffer, the investigation into whom still lingers over the department. There's even a brief shot of the ‘H’ Board, tucked away in a meeting room.

Steph could have a bigger role in all this, not least for the faint, romantic spark between her and Steve – a suggestion that makes this critic squirm. Steve’s trying to repress his womanising ways, which have hindered cases in the past (especially with DI Lindsay Denton), and getting with Corbett’s widow feels like a step too far.

This parallels another set of sparks between Kate and Joanne, hinted at in episode one. In a series that doesn’t really like to examine love or sex for very long, these little ambiguous moments feel explosive. Through this episode, there’s little question of Kate’s present loyalties and admiration for Joanne. But, considering her previous undercover operations, you have to wonder if she’s not pulling the same deceptions – but for whom?

AC-12 look deep into the journalism of the deceased Gail Vella (Andi Osho), who covered several cases of corrupt coppers. This includes Steve’s unlawful shooting case from season one, former Chief Superintendent Patrick Fairbank’s trial from season three, and the inquiry into Operation Pear Tree from season five. She was responsible for airing the truth, but dark and powerful forces (it is suggested) tried to shut her up. 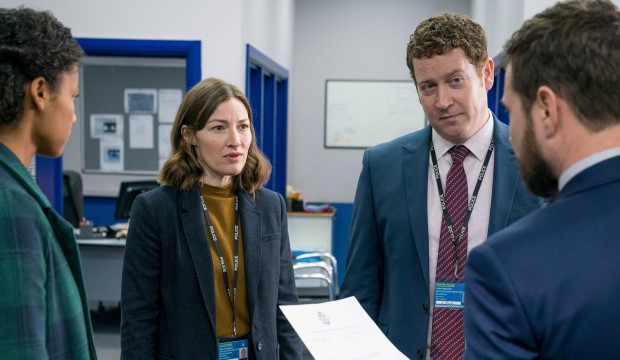 It’s Joanne’s turn to be interrogated by the might of Ted Hastings. He ascends in these familiar, claustrophobic scenes – filmed in long takes to make the experience more authentic. Adrian Dunbar resumes that passion and care and vehemence, never repressing his character's hatred or suspicion.

But Joanne is a different kind of case, so drowned in secrecy as she is. By the end, she actually agrees with Ted – has that ever happened before? And given her final scenes of the episode, mirroring the bitter words of former OCG member McQueen (Rochenda Sandall), the questions tangle further. To climb through these knotted roots is a bounteous escape.

Episode two ripples with dense thrills, but less avid fans of Line of Duty might become baffled and lost in Mercurio’s multi-dimensional maze of coppers. He’s created an entire world and mythology, the rules and the history and the acronyms worthy of fanatic study like a high fantasy series. And the confusion is part of the fun: breathlessly stitching in so many questions that'll have viewers postulating until next week.