Kelly Macdonald stars in the latest Line of Duty, which changes its atmosphere this time around. Adrian Dunbar, Martin Compston and Vicky McClure also star

Line of Duty season 6, BBC, episode 1 review 4 Line of Duty season 6, BBC, episode 1 review Euan Franklin
The nation needs Line of Duty right now, and the viewing figures will probably agree. At a time when the real-life police are losing a lot of public trust, the mission of Anti-Corruption Unit 12 – stringing up bent coppers – feels more necessary and satisfying than ever. And where a lot of series dry up in their sixth seasons, writer/creator Jed Mercurio keeps shaking expectations.

Season five, featuring the ill-fated UCO John Corbett (Stephen Graham), saw the start of a change in format. Season six is even more daring, splitting the core AC-12 team apart and finding a curiously intentional mundanity in the aftermath. This Line of Duty feels different to usual, but the familiar thrills are there: the heavy details, the sharp interrogations, and (most importantly) the suspected copper.

This time it's DCI Joanne Davidson of the Murder Investigation Team (MIT), played with enigmatic strength by Kelly Macdonald. From the first episode it’s already a curious turn for Macdonald, whose roles are often filled with frustration and trauma (see The Victim and Giri/Haji). Here she's ambiguously repressed, fitting comfortably into the series as a detective with many things to hide.

But whereas with previous seasons you get to know the villain’s vices and corruptions, Mercurio keeps most of them locked tight. This brings immediate credence to the writer’s claim that Davidson is ‘the most enigmatic adversary AC-12 have ever faced’.

Davidson follows up a year-long investigation into the murder of journalist Gail Vella, finally finding a likely suspect. Superintendent Buckells (Nigel Boyle), the most annoying authority in the series, keeps getting in the way while expecting a quick result – recalling CS Hilton’s (Paul Higgins) pressure on DCI Roz Huntley (Thandie Newton) in season four. 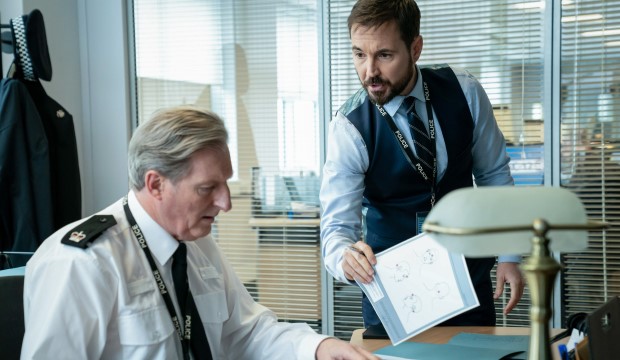 It wouldn't be Line of Duty without a lot of heavy acronyms. In this opening episode, CHIS makes an entrance: standing for Covert Human Intelligence Sources, one of which proves vital to Davidson's case. When she’s eventually given the go-ahead, she drives to the location with her team… only to divert them, seeing a robbery en route. This suspicious action reaches DS Steve Arnott (Martin Compston) at AC-12, who thinks it’s worthy of investigation.

The AC-12 atmosphere has turned stale, even menial. Steve looks more haggard and apathetic than usual. His verve for catching corrupt coppers has left the building, it seems. Similarly, Superintendent Ted Hastings (Adrian Dunbar) has little remaining of his former spirit – keeping up the smiles, but struggling to stay motivated. The spring in his Northern Irish tones is wilting.

His power and standing were torn at the end of season five, following a tense investigation of AC-12 to unveil the mystery of ‘H’. The only progression was the slightly absurd discovery that 'H' indicated four officers entrenched in a clandestine network of corrupt coppers feeding information to Organised Crime Groups (OCGs) – for which, Hastings was suspected. AC-12, then, has lost its rep and the bitterness is palpable. No word yet on how that search for 'H' is going.

The shift in tone provides deeper intrigue, clouded in mystery. Mercurio’s not ready to show all of Davidson’s cards yet, which will only increase the discussions filling reviews and Twitter space over the next seven weeks. A hint is given in an interview with Martin Compston for Empire magazine, in which he claims this season will tie previous seasons together. Happily, we have the next month-and-a-half to figure out exactly what that means.