John Simm and Richie Campbell star in this new ITV detective drama, set in Brighton and written by Russell Lewis

Grace, ITV, episode 1 review 2 Grace, ITV, episode 1 review Euan Franklin
Why are so many crime dramas set near water? There’s probably an academic paper somewhere outlining the portentous and poetic connection between death and the sea on TV. Maybe it’s all about isolation: concentrating the action into a separated town or city. Or is it simply that bodies are easier to dispose of (according to dark telly lore) when pushed, with weights, into the sea?

Like The Bay and Broadchurch, the new Brighton-set detective drama Grace – penned by Endeavour writer Russell Lewis – is another ITV series featuring deaths in a seaside town. Unfortunately, this 90-minute opening episode to the season, continuing later this year, doesn’t indulge in much of the fun that's expected from a coastal setting.

John Simm plays Detective Superintendent Roy Grace, who spends his days doing… well, not a lot. He’s under warning from his superiors after stating publicly that he used spiritual methods to investigate the disappearance of his wife. He’s grey and smiles rarely, a man of few words.

Thankfully Detective Sergeant Glenn Branson (Richie Campbell), a newly promoted friend on the force, brings Grace a juicy case. A van carrying lads on a stag night crashes on the road. Most of them are in critical condition, but the groom has disappeared completely. 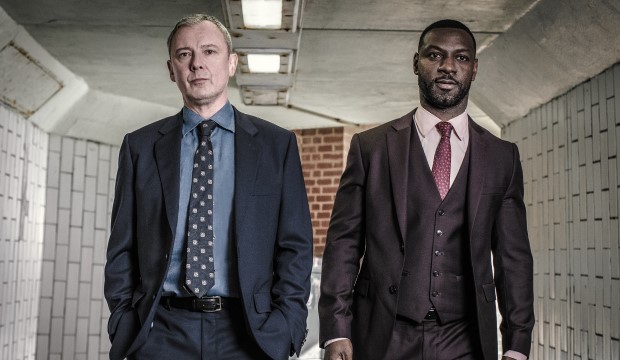 The episode plods along the usual routes: speaking to relatives and loved ones. Grace and Branson's rapport and dialogue proceed in such formulaic structures; Lewis doesn’t even bother dressing up the clichés. They even border on the inhuman, especially as Branson talks with such casual nihilism about recovered bodies, treating them like livestock. This would suit a much darker show, but Grace is so tonally imbalanced that you can’t figure out what it’s trying to be.

The lines of questioning are composed from similarly tedious templates. Even high tempers, which make most fictional detectives so watchable, are absent. Grace is still grieving for his missing wife, but it’s limited to inward despair: found in dreams instead of alcoholism. Not that we really need another alcoholic detective, but is a faultless character the only alternative? Even his dabbling in the occult is treated with underwhelming ambiguity.

The plot turns into a more curious, horror-movie direction involving a classic claustrophobic fear that won’t be spoiled here. It's a silly construction, but offers a much-needed shot of adrenaline to counter a mostly apathetic experience.

And despite the added suspense, turning into a race against the clock, there's still a lack of emotional stakes. You don’t learn enough about the potential victim to really crave their rescue. As a result, Grace is an exhaustingly dry experience. Even the spirit world can't save it.

Grace airs on Sunday 14 March at 8pm on ITV