How far does gender affect opinion on the all-female Ocean's 8? A male and female critic go head to head

The ideal heist film should be a real treat. On the crowded, teetering dessert tray that is cinema, it should be one of the most attractive, irresistible items on offer, with added everything and the cherry on top. It should be criminally bad for you in the best way possible. Ocean’s 8 is not bad but, for a heist movie, it’s not quite bad enough.

Slimming down from the previous Ocean’s Thirteen – the final instalment of Steven Soderbergh’s Ocean Trilogy – this spin-off, directed by Gary Ross, comes across a bit like Ocean’s lite. It does everything it should but with fewer laughs, fewer zany twists, fewer memorable moments. Technically, with fewer characters, everybody should get more screen time – and the all-female, all-star cast is what makes Ocean’s 8 seem so irresistible in the first place – but that seems unevenly distributed too. 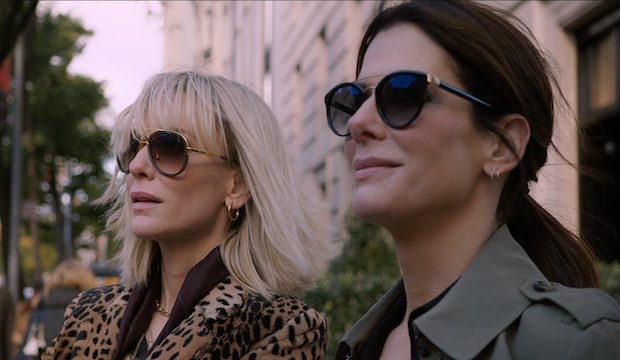 Most of the load falls on Sandra Bullock as Debbie Ocean, the younger sister of the late heist mastermind Danny Ocean, who has just been released from a five-year stint in jail. She immediately seeks out her old partner-in-crime, Lou, played by Cate Blanchett who also does much of the heavy lifting in the acting department. Together they assemble a crack team of con artists – played variously by Helena Bonham Carter, Mindy Kaling, Awkwafina, Sarah Paulson, Rihanna (whose lines are kept to a minimum) – to swipe a $150 million Cartier diamond necklace off the neck of socialite Daphne Kluger (Anne Hathaway, at her Princess Diaries best).

To (literally) pull it off, the group has to infiltrate New York’s Met Gala – the most exclusive party in America, apparently – which is a fine excuse for two things: fashion (the number of good-looking frocks on show is almost embarrassing) and celebrity cameos, lots and lots of them. But for all this extravagance and the innumerable appearances from the famously badly-behaved, there’s something remarkably tame about the whole affair. 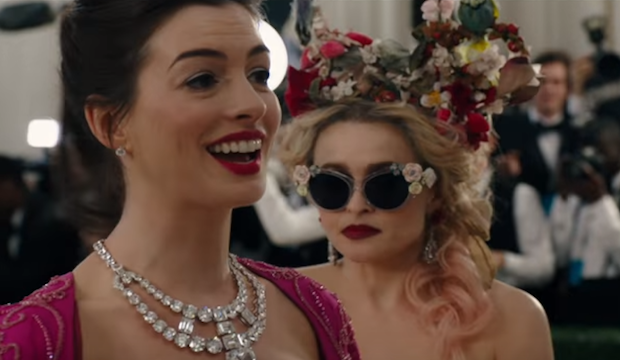 As well as to get even with her art dealing ex (Richard Armitage), Debbie claims to be carrying out the heist in honour of her brother and it does feel like all the slick manoeuvres pass under the dead man's watchful eye and are made to fit his formula. You wish the accomplished troupe could make him turn in his grave just a little bit, that it were a little more send-up than send-off.

The film also seems designed to please Steven Soderbergh who, ironically, produced an arguably better and more mischievous spin-off in last year’s Logan Lucky (although without the feminist twist). All of the above means, of course, Ocean’s 8 is harmless fun. In one sense, that’s a shame but, in another, it makes it hard to complain too much; it’s a pleasant way to while away a summer evening – after you’ve had one or two too many.

It’s no coincidence that Debbie Ocean’s heist revolves around women; that’s the whole crux of the con.

‘A Him gets noticed, a Her gets ignored. And for once, we'd like to be ignored,’ Debbie tells her partner in crime as they recruit a criminal crew to steal priceless jewels from the Met Gala.

In a film full of fame, flashbulbs and high fashion there is plenty to notice. But it’s the ways in which these women are overlooked that make Gary Ross’s Oceans trilogy spin-off so smart.

Sandra Bullock makes for a fierce Debbie Ocean, and the seven women she leads are anything but wall-flowers.

There’s leather-clad Cate Blanchett as a cool second-in-command, stoner Rihanna hacking through security systems, Mindy Kaling as the goofy jewel expert, Helena Bonham-Carter in full kook mode as a designer, Sarah Paulson as suburban mum turned slick Fence, Awkwafina as wily pick-pocket and simpering Anne Hathaway as the spoilt starlet at the centre of the robbery. 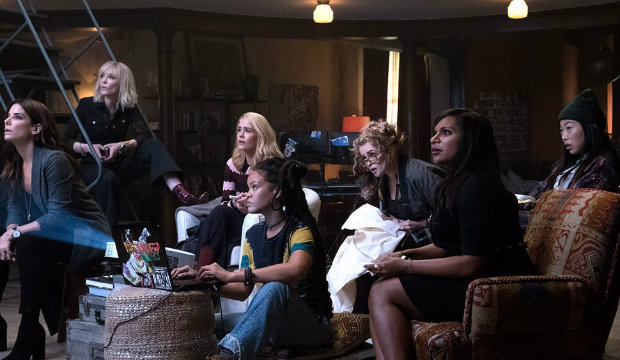 The fun comes in watching the women interact, bond and plot their crime. Details zing with freshness and humour – nutella scoffed straight from the jar in a moment of desolation, a hasty Tinder tutorial for the 'spinster' and the mixture of ego and insecurity that bubbles out in a dress-fitting tantrum.

Predictably the large cast means that depth is largely forsaken for gags and paciness. But there’s a self-awareness to the tongue-in-cheek characterisation that helps us relate to these steely, unapologetically ambitious, thrill-seeking women on screen.

With the razzle dazzle of flawless make-up and fabulous outfits as distraction, they scramble to steal diamonds in the direct spotlight of the world’s media and security experts. Of course it’s not that women are ignored; it’s their ability to deceive and outsmart that is dismissed.

While it’s all amusing enough to watch – with couture and celebrity cameos galore – the film loses its fizz in the heist itself. Compared to the bravura and audacity of Soderbergh originals, Ocean's 8 delivers a scam that’s straighter, flatter and safer.

It's disappointing. For a typical heist movie, it would be a fatal blow. But the most enjoyable and original moments in this feminist take on the genre have little to do with the crime itself. And the capability and appetite of these con-women is thrilling enough that we can forgive a lacklusture crime.

Staring in the mirror, delivering a pep talk to her reflection, Debbie declares that she's breaking the law ‘for all the eight-year-old girls lying in bed dreaming of being criminals’. Of course it's also for the boys out there who like tell girls how they should behave and what they are capable of. 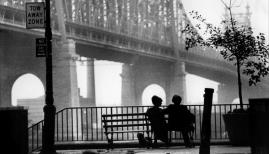