6 CW readers are interested
The Post film review 4 The Post film review Dan Einav
Timely is a word that gets bandied around a lot nowadays. It may be a symptom of our turbulent political climate in which everything from fan fiction to kitchen tea towels seems to resonate with ‘relevance’. But every now and then, something does come along to fly in the face of 'what’s happening right now' with parallels so obvious that no other word seems to fit.

The Post, Steven Spielberg’s cool, calm and collected political drama, is an undeniably timely film – and it knows it. 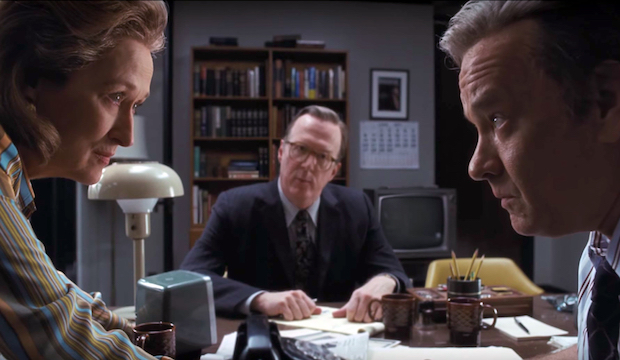 Focusing on the heroic role of The Washington Post in publishing The Pentagon Papers – top secret government reports exposing the growing U.S. involvement in the increasingly futile Vietnam War over several presidencies – the film provides some precious reinforcement to one of the pillars of democracy: freedom of the press.

It also shows, subtly, how a woman can get something done in a man’s world. Katherine Graham, the then-head of The Washington Post and one of America’s first female publishers of a major newspaper, manages to lift herself out from under the influence of an all-male board of investors and the weighty legacy of her father and husband, who ran the paper before her, to defy the Nixon administration which threatened it with full fire and fury.

She received much-needed encouragement from her editor-in-chief, Ben Bradlee, played by a pleasantly gruff Tom Hanks whose gravelly tone and rough-edged bullishness is the perfect balance to the wringing hands and furrowed brow of Meryl Streep’s Graham – a stunning performance that pulls you in close with its nervous quietness.

Severing personal ties and friendships with those in the White House – including the then-secretary of state Robert McNamara (Bruce Greenwood) – Graham and Bradlee send themselves on an inevitable journey to the Supreme Court, with a whole newsroom and advisory team in tow, which just happens to be fit to bursting with familiar faces. 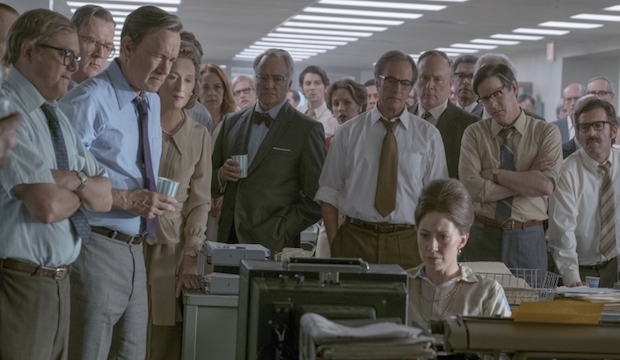 Bob Odenkirk (of Breaking Bad/Better Call Saul fame) is brilliant as the man who sources the government reports from infamous leaker Daniel Ellsberg (Matthew Rhys). Jesse Plemons (recently in Black Mirror) and Zach Woods pop up as distressed legal aides, buttressing the Bradley Whitford (Get Out) as the equally distressed chairman of investors. Elsewhere, Alison Brie plays Kay’s grown-up daughter and Sarah Paulson fills in as Antoinette Bradley, who unfortunately is largely relegated in the film to patting her husband on the back and providing sandwiches.

The Post, with its excellent ensemble cast – along with the typewriters, stressed men in shirtsleeves and reams of paper – is inevitably reminiscent of Spotlight, the 2015 knock-out which comes from the same hand of Oscar-winning screenwriter John Singer. In a remix of that earlier film’s formula, Spielberg manages to produce some genuine heart-racing drama out of the trials and tribulations (and triumphs) of investigative journalism, proving himself yet again to be a master of big screen entertainment.

That dab hand can occasionally turn on him a little. The heavy dusting of that trademark Spielberg sugar – with added sprinkling of a dutiful John Williams score – coats the film in a protective layer which means we never really get to see it rocked by events. It's not quite as brave as Bridge of Spies, Spielberg's nail-biting Cold War thriller which also featured Tom Hanks.

In the end though, we sail home happy and riding high on that unbeatable wave of American idealism as the cogs of democracy turn like a fine-tuned machine.

In cinemas this weekend: Brendan Fraser stars in Oscar-bait obesity drama
Sign up to CW’s newsletter
By entering my email I agree to the CultureWhisper Privacy Policy (we won`t share data & you can unsubscribe anytime).
6