Black Mirror Season 3: episode after episode of bold and bleak misanthropy that makes the future look as thrillingly dark as ever

Charlie Brooker’s Black Mirror first crawled onto our screens in 2011 with its trademark sinister satire. The newest release of this grippingly dark, sci-fi series was released on Friday on Netflix, having moved from Channel 4, with six new episodes.

The overarching theme of the series is consequences. What would happen if we meant what we said online, if people found out what we do behind closed doors, if we allow our technological obsession to dictate our future? Black Mirror confronts the darkest parts of human nature, and reminds us of how frequently we shrug them off as insignificant.

What is instantly apparent is that Brooker has upped his cinematic game for the Netflix generation. Our first episode is set in a Pleasantville-esque haven across the Atlantic. The fight-scenes in Men Against Fire are big-budget productions. You might say that it’s a bit over the top, as if Brooker’s original series has been exaggerated for a viewer who has grown bored with the pace of the first two series. It’s less a black mirror on our own society than a bleak look into a dystopian future far further away than in previous series, a rumination on where we’re going, rather than a meditation on where we already are.

The exception to this freneticism is the rather less nightmarish, though no less big-budget episode, San Junipero. In a future where we can upload our minds to the cloud after we die and live forever as a twenty-something in a seaside paradise, we are alerted to the realisms of what life after death means. It asks whether, if there was the option, we would choose to live forever.

The problem with San Junipero is that it’s not what people want from Black Mirror. We watch because we want to be frightened, not have our hearts broken. In this sense, Playtest doesn’t disappoint. In today’s world, where virtual reality is possible with a GoPro and a headset, this episode asks how far technology will go. In a nightmarish offering, bumbling traveller Cooper signs up to a VR game in which his fears determine the narrative. Giant spiders with human faces aside, it will suffice to say that the game uses Cooper’s own mind to confront his innermost fears, and that they're more human than you’d imagine. 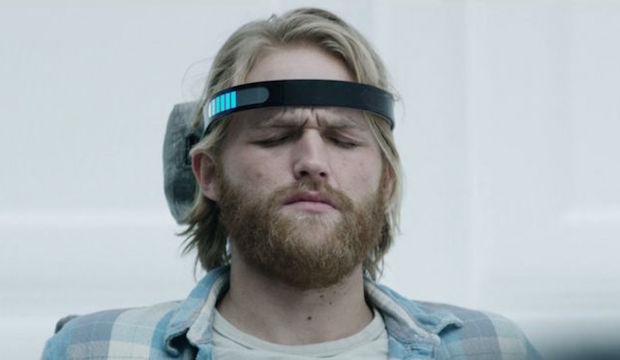 Cooper (Wyatt Russell) experiences a frightening world where VR and reality can't be distinguished in Playtest.

The least satisfying are the third and fifth instalments. Shut Up and Dance presents the stomach-churning theme of how far people will go to protect their darkest, most intimate secrets, whilst Men Against Fire is an all-guns-blazing tale of eugenics and how future technology might make it possible. Although the theme of both episodes is undeniably distressing, they are perhaps trying a little too hard to play up to Hollywood clichés to strike a realistic tone.

What we love about Black Mirror is it’s unrepentant way of illuminating the cracks in our society. In Hated in the Nation, Brooker takes us through what might really happen if everything we said online came to fruition. Twitter takes the brunt of Brooker’s baton here, where trolling is made easy behind a faceless computer screen. Granted, the story is told through the medium of a hoard of mechanical bees, but the reflection of our own society is crystal clear.

Our obsession with social media likes and internet ratings and the way in which we measure popularity via our online status is illustrated in Nosedive. With Bryce Dallas Howard as our hopeful socialite, we are presented with a future in which people themselves are rated, in which something has only happened if it’s on social media, in which pleasure comes from the approval of others rather than personal enjoyment… sound familiar? That’s because we’re already there. 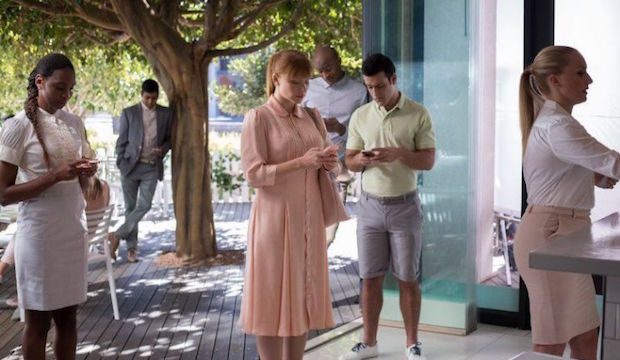 Lacie (Bryce Dallas Howard) is one of a crowd in Nosedive

It's this uniquely menacing irony which steals the show. Black Mirror might have become more USA-orientated, but it hasn’t lost its ability to deliver a powerful kick. If you’re reading this, you’ve probably come here via Facebook or Instagram. You’ve probably ignored calls from your family to binge-watch the series. You might have read abusive reviews and online tweets related to the show and its creators, as Brooker himself revealed has happened to him, an experience which inspired Hated in the Nation. That’s the thing about Black Mirror: we are the characters, the cannon-fodder for Brooker’s brilliantly disturbed mind, and just as Cooper allows himself to enter a game in which he tests the limits to which he will scare himself, that’s what we are all doing as we sit down to watch this twisted show.