This powerful documentary about Sonita Alizadeh is not just an Afghanistan documentary but a rap film, also covering women's rights and the migrant crisis

1 CW reader is interested
Sonita film review 5 Sonita film review Frankie Crossley
In just an hour and a half, director Rokhsareh Ghaem Maghami reminds us all why the migrant crisis facing the world today is one of the biggest issues on our planet. It is a film which will make you question what you think you know about the war in Afghanistan, and challenge your conceptions about both the movement of people and women’s rights on the most human level. This documentary is not easy going, but that’s what makes it so phenomenally powerful and why you should see it.

Sonita follows young Sonita Alizadeh, an Afghan refugee living in the Iranian capital of Tehran, as she attempts to forge a career as a rapper. Her idol is Rihanna, only instead of rapping about parties and boyfriends, she spits with intrepid lyrical eloquence about women’s rights.

Sonita also differs from Rihanna in one very specific detail: she is to be sold for $9,000 to an unknown man, in order to help finance the cost of her older brother’s bride in Afghanistan. Her unsupportive brothers demand that she puts her aspirations aside to return to her home country, where the Taliban threat looms large, to be married off.

They are not the only opponents of Sonita’s dream. It is illegal for women to sing publicly in Afghanistan, and even in Iran where women’s rights have undergone a (minimal) transformation, the government has laws in place to prohibit it. Many of the recording studios she visits refuse to support her on this basis, as does her school (albeit reluctantly).

What is so intriguing about this film is the insight it provides into the internal views of women on their status in Iran and Afghanistan. We are told that in Iran a woman may choose whether to be married, yet at their school a gaggle of teenage girls laugh about the future husband of one pupil, thirty years her senior, and the beating of another for failing to comply. It’s a communal understanding amongst these women that, as Sonita’s mother says, 'people will laugh at you' for trying to change the system. This is not blind embrace, but reluctant acceptance. 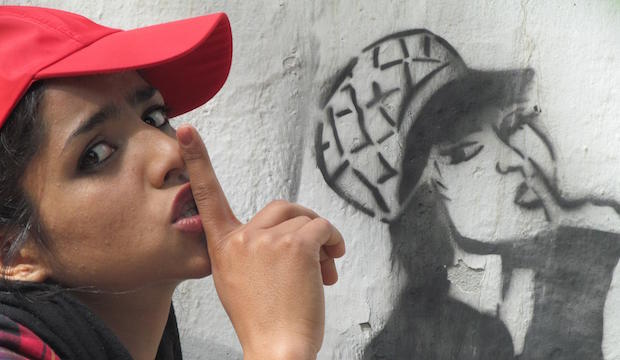 Perhaps the most cinematically interesting aspect of the film is the question it raises about the role of the documentary filmmaker. With the risk of Sonita’s mother taking her back to Afghanistan as soon as the following day, Maghami and her team pay $2,000 to keep her in Iran for six months. Debate is not avoided: we are shown the discussion between the filmmakers, and are made acutely aware of the close relationship and duty of care between filmmaker and subject.

“I am for sale.” These words, rapped by Sonita in a music video with a barcode painted on her forehead, are the most powerful of the film. They capture the fear in a young girl’s heart about being forced to return to a war-torn country to marry a man she has not met.

We won’t spoil the film in revealing whether this happens or not, but the tears shed when our eponymous subject receives her first passport are a reminder of the turbulence felt my many in the Middle East. In the present political climate, Sonita is not only absorbing but critical in illuminating the humanitarian crisis we face, and sheds a light on the distressing circumstances which women and refugees across the world face on a daily basis. A must see.