1 CW reader is interested
Darkest Hour film review 4 Darkest Hour film review Daniel Lewis
It’s probably a little too easy to wisecrack about Darkest Hour being the prequel to last year’s Dunkirk – one of the best cinematic experiences 2017 had to offer – but that’s essentially what the film is: an almost day-by-day account of May 1940, the month leading up to that heroic evacuation effort where some 330,000 Allied troops were rescued off the coast of France from the advancing German army.

And, in fact, pairing this film with Christopher Nolan’s ‘thinking person’s blockbuster’ is not completely unfair; they have a lot in common. Darkest Hour, much like Dunkirk, is in tune with those quieter moments of uncertainty that fill the spaces between war’s fire and fury. It also manages to squeeze gallons of interest and drama out of the tinniest of timelines. And it’s enjoyable. 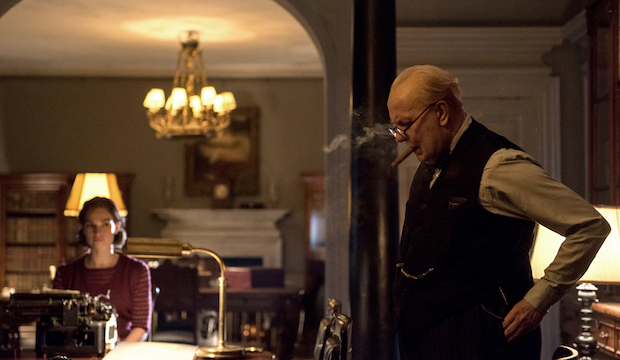 But, unlike Dunkirk, this film is not so much concerned with military tactics as it is with political ones. And for this, the spotlight is firmly on Churchill – quickly drafted as Prime Minister to take over from the increasingly unpopular and unfit Neville Chamberlain (Ronald Pickup) –as he battles his party’s and his own doubts and discontents all while trying to boost public morale as Hitler sweeps across Europe. All of which involves writing speeches. Lots of speeches.

It’s no mean feat to make these now-famous words sound fresh but Gary Oldman more than rises to the challenge, even making some of those well-worn phrases feel spontaneous. In fact, Oldman’s depiction of the legendary statesman ranks among the best on screen, if it isn’t the best. There’s been plenty of competition recently too – John Lithgow’s portrayal in Netflix’s royal drama The Crown comes to mind. But where Oldman outpaces the others, beyond an incredible physical transformation, is in the sheer scope he offers the theatrical politician.

Tender and silly with his wife Clementine Churchill, played by a warm (and underused) Kristin Scott Thomas; humble and witty with King George VI (Ben Mendelsohn), who also can’t pronounce his 'r's; and he lets his guard down with Elizabeth Layton, his secretary throughout the war. Lily James’ (who we recently interviewed) measured and contained portrayal of Layton manages to throw a light on the man-myth-legend that humanises him, making the greatest Briton of all time (according to one poll) a slightly less distant figure. 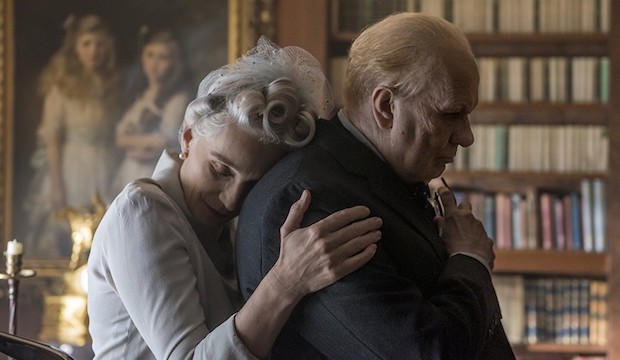 Darkest Hour can feel like a little too much conversation and the storytelling becomes a bit loose (there’s a lot of map-reading at one point), but the film is not devoid of its House of Cards moments. With neo-noirish lighting and sleek transitions—courtesy of Atonement and Anna Karenina director Joe Wright—plus a brooding soundtrack, Darkest Hour could, at times, pass for a thriller.

Tinkering with the facts aside—just how close Churchill came to negotiating peace with Hitler and whether he ever actually rode the Tube is up in the air—but what rings true is the sentiment behind it all: in the darkest hour, it’s personality which burns most brightly.