3 CW readers are interested
The Party film review 5 The Party film review Dan Einav
How wonderfully ironic that a film shot in monochrome is filled with characters whose morals, beliefs and intentions are anything but black and white. Sally Potter’s new film – a kind of chamber play made for the big screen – takes a darkly comic look at the messy web of hypocrisies at the heart of ostensibly stable relationships, all while offering a riotous send-up of the middle-class intelligentsia.

The Party opens with the arresting image of a front door being opened, revealing a gun-wielding, murderous-looking Kristin Scott Thomas inside. From there, the film unfolds in real time, showing us how we got to this dramatic state of affairs by taking us back to the start of the evening when Scott Thomas’ Janet was opening the door to her guests rather more invitingly.

TRY CULTURE WHISPER
Receive free tickets & insider tips to unlock the best of London — direct to your inbox
A small groups of friends have all congregated at Janet’s home for a dinner to celebrate the latter’s promotion to shadow minister for health. Films that take place in one setting require the presence of strong personalities, sharp dialogue and impeccable casting to hold the audience's attention. The Party boasts all three; each character possesses a different eccentricity and each actor is at the very top of their game.

First to arrive is caustic cynic April (an electrifying Patricia Clarkson) with her boyfriend Gottfried (Bruno Ganz), a hilariously platitudinous ‘life coach'. The pair’s incongruity is a continuous source of comedy. They’re followed by Martha (Cherry Jones) and her wife Jinny (Emily Mortimer) whose pregnancy might yet herald the end of their relationship. Last, and certainly not least, is Tom (Cillian Murphy), a mad-eyed city banker teetering on the edge of a nervous breakdown, who comes armed with a case of cocaine – and the gun.

At the centre of it all are the hosts. Janet – idealistic, upstanding and, it soon transpires, unfaithful – and Bill (Timothy Spall), who after sitting completely impassively for several minutes comes to life only once he’s announced that he’s dying. 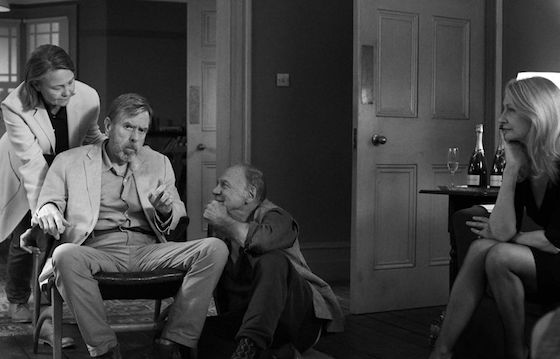 Further truths spill out in the aftermath of this shocking revelation; loyalties and friendships that have endured for years unravel in minutes. To reveal much more about the narrative twists would be to spoil the fun. We’re treated to exhilarating, acerbically worded confrontations, moments of real levity and flashes of sporadic, unexpected violence.

Things get so uncomfortable that we can barely watch at times, but the performances are so compelling that we can’t look away even for a moment. It’s a testament to the cast that even when circumstances start to verge on the absurd, the tone never deviates away from tragicomedy towards mere farce.

And all this is complemented by some artful cinematography. The camera rarely remains in a fixed position. Instead it adds to the uneasy, claustrophobic atmosphere by finding unusual angles and closing in on the actors’ increasingly fraught expressions.

Coming in at 71 minutes this is an exemplar of taut, controlled filmmaking which achieves more in just over an hour than most films do in double that time. And yet, we still end up wishing that it went on for just a little bit longer.