The bitterly funny and surprisingly affecting Three Billboards Outside Ebbing, Missouri is a welcome return to form for In Bruges writer-director Martin McDonagh

6 CW readers are interested
Three Billboards film review 5 Three Billboards film review Dan Einav
With his new film the British writer-director Martin McDonagh joins William Faulkner, Tennessee Williams and Truman Capote as a storyteller in the Southern Gothic tradition. Texts that belong to this sub-genre of American literature are often diffused in style and tone, but they all broadly address the same themes (and, as the name suggests, they are all set in the Deep South).

Narratives in the Southern Gothic mode are imbued with a sense of malaise and are populated by morally ambiguous characters who despairingly attempt to give their lives some meaning. These are tales that exhibit the human capacity for cruelty and vulnerability, and are usually shrouded by enough mystery to frustrate the reader or viewer’s need for closure.

McDonagh mixes all these elements together and serves us up with quite possibly his best feature yet – a dizzyingly mordant cocktail that hits us harder than a shot of bootleg moonshine.

The story follows Mildred Hayes (Frances McDormand), a foul-mouthed, powder-keg of a woman grieving for her recently murdered daughter. Disillusioned with how any efforts to bring the killer to justice have fallen by the wayside, Mildred rents out three disused billboards outside – you guessed it – the fictional town of Ebbing Missouri, and puts up posters admonishing the local police for their ineptitude.

The billboards cause something of a scandal in a parochial community that is fiercely devoted to its law enforcers, and in particular the station chief Bill Willoughby (Woody Harrelson).

What follows is a battle between Mildred who hopes to galvanise the police into action, and Willoughby who tries his best to shut her up. Billboard campaigns swiftly escalate into violence but a begrudging respect between the warring parties soon becomes evident.

One of the film’s many successes is the way that it repeatedly cultivates certain expectations and then tears them down. Willoughby initially comes across as the archetypal formidably macho adversary, but a combination of strong characterisation and superb acting means that he turns out to be a compassionate, equally troubled and very funny foil to Mildred.

Meanwhile Sam Rockwell’s oafish Sgt. Dickson starts off as a walking punchline before leading the film’s meditative conclusion about remorse and redemption. 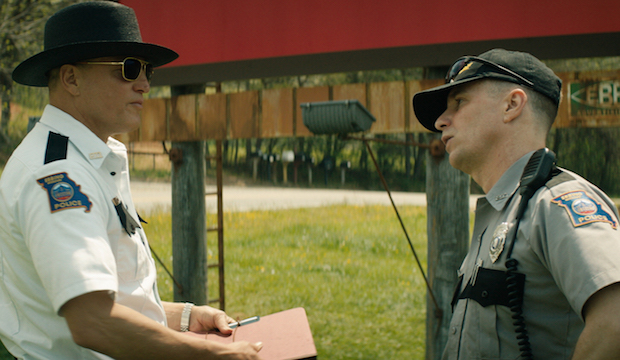 Conversely we find ourselves shocked by quite how far Mildred is willing to go in her fight against police complacency. The character is a world away from the genial detective Marge Gunderson played by Frances McDormand in Fargo in 1996. She received the Oscar for best actress then, and undoubtedly will deserve to win again for her performance here at the awards in February next year.

McDormand has many of the best lines and a handful of badass moments which will likely elicit cheers from audiences worldwide. But her real achievement is the way in which she conveys the profound sadness which afflicts this outwardly humorous character.

Pain is writ large on her face throughout, and every smile she forces is heartbreaking. One scene in which she pretends to talk to a nearby deer is enough to bring us close to tears.

It almost feels like a misnomer to label Three Billboards as an out-and-out comedy since the entire film is tinged with tragedy. At one moment we’re in hysterics over some expletive-laden rant and then catch that what we’re laughing at is altogether devastating.

McDonagh’s style is uniquely disarming in this way. The inimitable frenetic energy of his writing perhaps stems from a realisation that if the humour were ever to relent, we’d all break down when confronted with the unbearable sorrow that lies below the surface.