The Death of Stalin film review ★★★★★

Well, The Death of Stalin shows that politicians need very little outside help with making ‘rifts’; they are pretty talented at doing that all by themselves.

The film casts us back to 1953 to look at the chaos in the wake of (no prizes) the death of Stalin. When the dictator rather ingloriously kicks the bucket, it sends his top ministers and advisors — terrorised by Stalin’s increasingly erratic and lengthy enemy lists — into a frenzy of infighting.

This film builds on writer-director Armando Iannucci’s previous work, the BAFTA and Oscar-nominated satires The Thick of It, spin-off film In the Loop and Veep, which mercilessly took apart British and American political machines.

Viewers familiar with Iannucci’s eccentric brand of comedy will be quite pleased. Iannucci reunited with his co-writer and ‘swearing consultant’ Ian Martin for the film and so the script still zings with those barbed one-liners and colourful put-downs that peppered his earlier work.

But fans may also be a little surprised. In The Death of Stalin, all those verbal pyrotechnics are set against a background that has turned pitch-black.

You’re launched into a parallel universe of deception and doublespeak so ridiculous that at times the characters might as well be speaking, well, Russian. The writing can still make you laugh out loud but it also turns you out of the cinema deeply suspicious of everyone around you.

For a couple hours, you stay wrapped up in the film’s weird Cold War sense of menace.

A host of familiar faces help throw some light on this shade, though. The Death of Stalin is packed with more stars than you could fit on a Soviet officer’s lapel.

Steve Buscemi and Simon Russell Beale are brilliant as Stalin’s left and right hand men, Nikita Kruschev and Lavrentiy Beria respectively, who go head-to-head while trying to wrest power from the dead dictator’s cold hands. A feckless Georgy Malenkov, played by Jeffrey Tambor, also tries to squeeze into the equation. 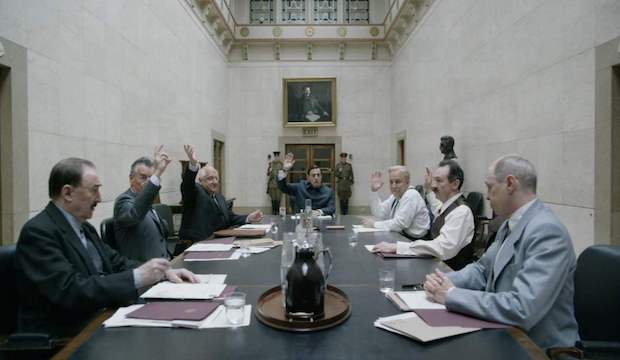 Rupert Friend and Andrea Riseborough are fantastic as Stalin’s neurotic overgrown children. And Jason Isaacs is unrelentingly funny from the minute he bulldozes in as General Zhukov.

There are some great set pieces too, such as a boardroom meeting (which Michael Palin undoubtedly steals) which gives a whole new meaning to bureaucracy, a seriously undignified moving of a corpse and a shambles of a state funeral.

The drawback of these moments which let it loose with the humour, is that the plot sort of falls out of the bottom of the film and the hilarity can’t quite make up for the floundering.

The Death of Stalin proves, however, that Iannucci’s critical eye just keeps getting keener and that he hasn’t at all lost the ability to make all his characters seethe and sizzle. The unsettling bits are just further proof of this fact.

He's taken down Westminster, the White House and the Kremlin and we can't wait to see what he tears down next.