Battle of the Sexes film review ★★★★★

But despite everything that women such as King have done to rail against the institutional gender inequality endemic in professional sport, the sad truth is that much of this engaging feature – set almost half a century ago – still feels uncomfortably pertinent.

Battle of the Sexes opens with Billie Jean King (Emma Stone), a multiple Grand Slam winner, fronting a group of other female tennis stars to establish an independent franchise after the United States Tennis Association offers to pay female competitors only an eighth of what their male counterparts earn.

TRY CULTURE WHISPER
Receive free tickets & insider tips to unlock the best of London — direct to your inbox
Billie Jean doesn’t have a firebrand personality – Sarah Silverman’s acid-tongued manager fulfils that role – and doesn’t crave any media spotlight. Stone portrays her as a humble, intelligent woman who has simply had enough of being disrespected and patronized by a host of painfully condescending male commentators, journalists and tennis club executives.

She is everything that Bobby Riggs (Steve Carell) is not. He is the very embodiment of boorish male bravado; a listless forgotten celebrity who at 55 craves another shot at the limelight. Sensing the marketing potential of pitting ‘the chauvinistic pig’ against the ‘women’s libber’, Riggs challenges King to a one-off exhibition match.

For him it’s another opportunity to regale the world with his boyish antics – a very funny montage sequence sees him cockily train in costume, with livestock and with a frying pan. For Billie Jean, however, it’s a chance to silence all the misogynistic critics who claim women can’t compete with men. 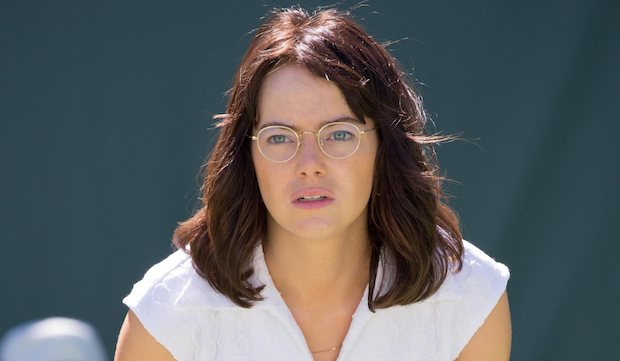 Riggs and King both become symbols of binary opposite socio-political ideologies. But where Jonathan Dayton and Valerie Faris’ (Little Miss Sunshine) film really succeeds is in the way that it shows us the players’ lives away from the fanfare of the media circus.

Carell is an inspired casting choice, not only because he can do clownish humour better than almost anyone, but because he’s a wonderfully nuanced actor who offers us the occasional glimpse of the troubled man behind the cartoonishly sexist facade.

Billie Jean’s narrative arc follows her self-discovery as a lesbian after she falls for her hairdresser, Marilyn (the currently ubiquitous Andrea Riseborough). Thankfully their relationship isn’t clumsily set up as a ‘major life turning point’, and Stone and Riseborough’s chemistry is given a chance to develop organically as much through tender looks and gestures as through dialogue.

But when the big match does finally happen, it goes on for much too long; even the most die-hard tennis fan will struggle to get invested in watching two body doubles fumble around the court.

Still, Billie Jean’s victory tastes sweet for a few seconds before we remember that it was only three months ago that Serena Williams’ staggering achievements in the sport were being downplayed by the antediluvian views of John McEnroe – another conceited former men’s champion.