Breathe film review 3 Breathe film review Dan Einav
As far as cinematic tributes to one’s parents go, few will ever be as filled with such sincere gratitude and admiration as Breathe. The idea for this uplifting tale – about Robin Cavendish a polio patient who was able to lead a rewarding, if physically compromised life, thanks in no small part to the unwavering support of his wife Diana – was brought to Andy Serkis by the Cavendishes' son Jonathan.

A longtime friend and collaborator of the debut director, Cavendish also worked as a producer on this project. While his involvement was likely an asset to the actors, his lack of critical distance from the narrative might well be a reason as to why the film largely feels like a sanitised, idealised version of reality.

TRY CULTURE WHISPER
Receive free tickets & insider tips to unlock the best of London — direct to your inbox
We get this sense from the very first scene, set in 1959, where Robin (Andrew Garfield) falls spontaneously in love with Diana (Claire Foy) while playing cricket for the village team. It’s all very posh, quaint and idyllic, and gratingly plays into all the stereotypes associated with England.

From there we rapidly skip past all the courting and move to Kenya where Robin works as a tea broker before he succumbs to polio. It’s an absolutely terrifying condition which causes almost total paralysis, but any palpable sense of agony or panic is strangely muted; all we get are a few glimpses of Robin stumbling and struggling to breathe for a bit before we’re told he’ll be lucky to live a few months (of course, we know he’ll go on to live for several years).

The softening of Robin’s anguish happens again later when, now being cared for at home, his respirator is unplugged by the pet dog. When he’s finally rescued after seconds of excruciating suffocation, he cheerily quips to his wife ‘well that was interesting’. Films about serious illness always run of the risk of being too maudlin, but Breathe goes too far the other way towards an almost fantasy level of positivity which distances us from the severity of the suffering.

The true story of Robin Cavendish’s remarkable will to survive and desire to help others like him is undoubtedly a rousing one. But are we really to believe that his depression lasted for only the first few months of his two decades of disability? Was his marriage, or his relationship with his son, never truly strained by the trying circumstances? Frustratingly, the film doesn’t seem interested in giving us any insight much beyond the logistical difficulties caused by Robin’s condition, and as a result the characters never seem more than one-dimensional. 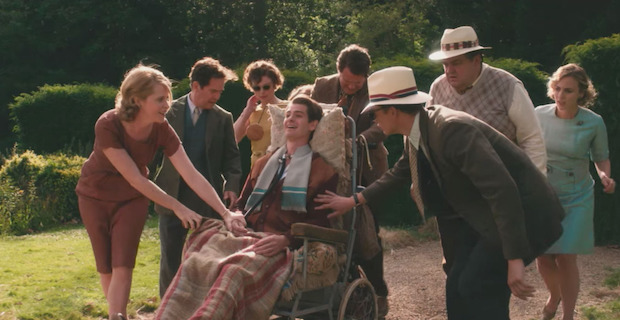 Still, this a very watchable ‘real-life fairytale' filled with touching, if not particularly challenging performances. Garfield can do little more than smile, gurn and put on a brave face for the majority of his screen time, but he imbues Robin with warmth and dignity. As the other lead, Foy is well cast as the superhumanly benevolent wife, nurse and mother who devotes almost her entire life to facilitating the life of the man she loves.

Elsewhere it’s a who’s who of British cameo stalwarts in supporting roles including Hugh Bonneville as the eccentric Teddy Hall – an inventor who builds a wheelchair which massively improves Robin’s quality of life – Stephen Mangan, and the always-excellent Tom Hollander, who plays both of Diane’s twin brothers. Between them they may provide too much light relief, but there are a number of times throughout the film where you won’t be able to stop yourself from matching Garfield’s big goofy grin.