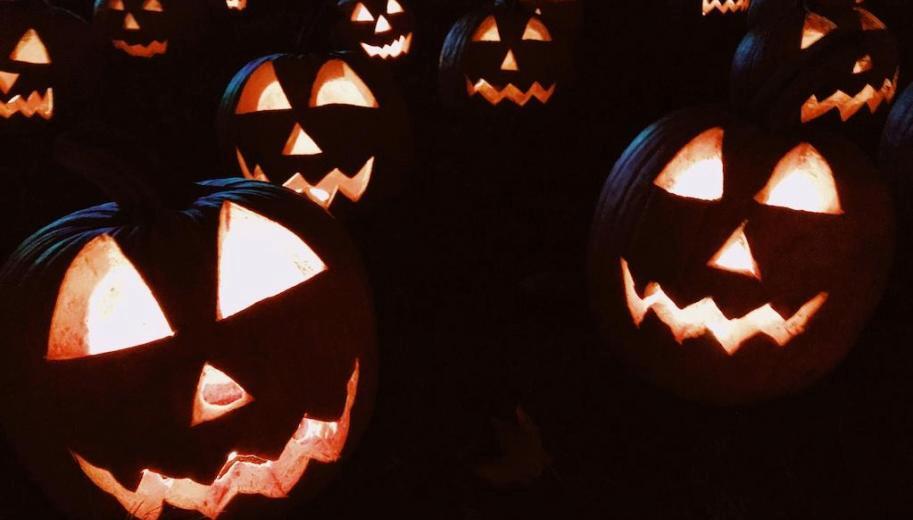 London's best Halloween events for spooktacular fun
Spend the dying days of October living it up. From classic horror screenings to ghost stories by candlelight and an immersive pumpkin trail, there's something out there for all souls.
Halloween at Shakespeare's Globe 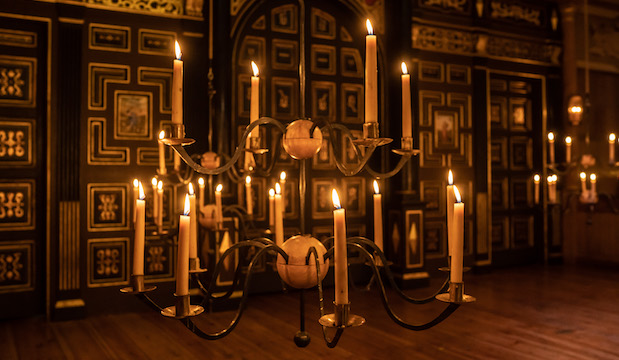 Shakespeare's Globe is fully embracing spooky season, running a Ghosts & Ghouls Family Tour (24 Oct – 8 Feb) to teach little visitors and their grown-ups about the scary happenings of the Bard's most chilling plays, and a Shakespeare’s True Crimes Walking Tour, delving into the wider area's criminal history. 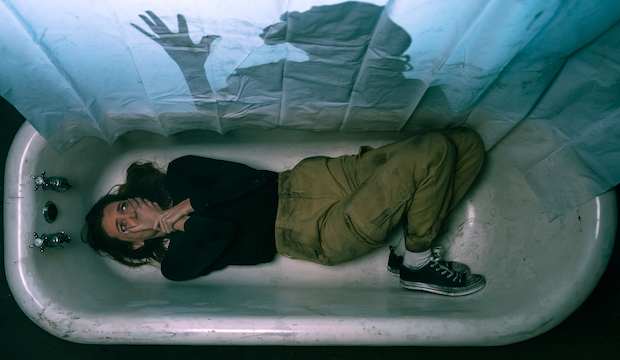 This intriguing offering sponsored by rum brand Kraken turns the friendly childhood game of hide and seek on its head, making it more, er, disappear for your life. An immersive experience designed to induce nightmares, players must conceal themselves in a labyrinth of dark, disorientating, underground spaces, while murderous seekers try to sniff them out. Fortunately, the game only lasts 20 minutes, and there's a Kraken-stocked bar on site for steeling then stabilising your nerves before and after you play.

Halloweek at The Cauldron London and The Wands & Wizard Exploratorium 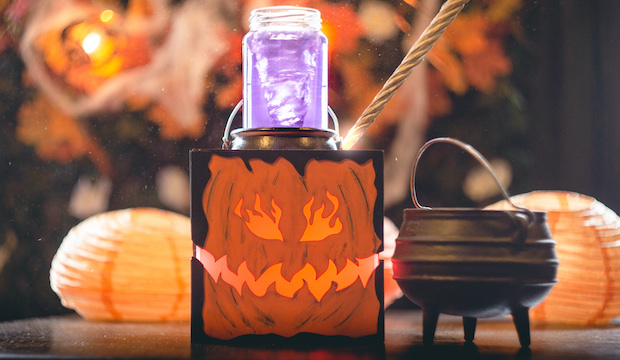 Brew your own cocktails, sorry potions, at a spooky mixology masterclass with sister venues the Cauldronin Stoke Newington and the Wands & Wizard Exploratorium in Soho. In the 1hr 45m class, you'll make a warm mug of HallowCream cider and a far more sinister sounding 'Blood of your Enemies', which might resemble a raspberry vodka martini with white chocolate. Mocktails are available for non-drinkers and those visiting with the kids.

The Rock Orchestra by Candlelight 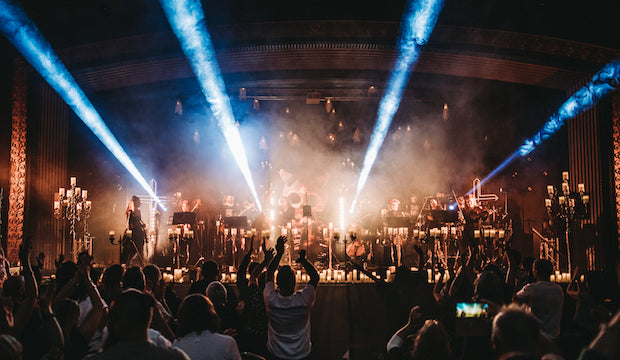 A chamber ensemble dressed in bejewelled skeleton masks are performing some of the most macabre rock and metal tracks ever written at this Halloween special from The Rock Orchestra. The immersive experience sees Brixton's O2 Academy lit by 1,000 candles as the orchestra, which has been running for the last 40 years, play tracks from Metallica, Led Zeppelin, Pink Floyd and more. 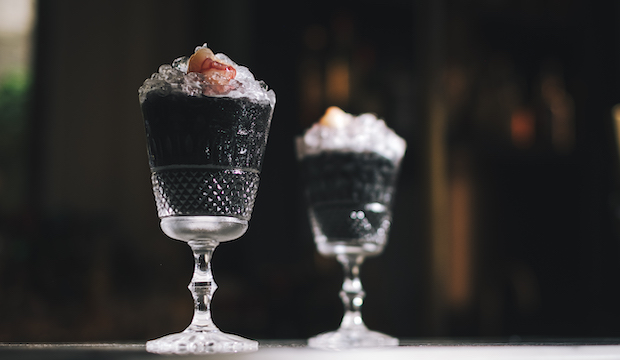 Those craving a side of drama with their Halloween should head to the famously haunted Theatre Royal Drury Lane, which is capitalising on its reputation and hosting gruesome-looking Halloween afternoon teas by day and a series of spooky theatre tours by night. The former is a chance to tuck into savoury bites and cakes by acclaimed London baker Lily Vanilli (hello, sticky toffee pudding with a cauldron of salted caramel). The latter will lead you through the theatre's out-of-bounds corridors, hearing about the scandals and ghostly figures haunting them as you go.

The Canterville Ghost at Southwark Playhouse 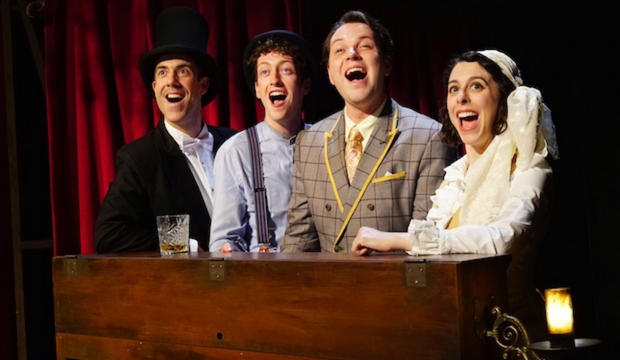 For a proper pukka ghost story, don't miss Tall Stories' vaudeville production of Oscar Wilde's The Canterville Ghost, about a family who move into a castle haunted by a murderous nobleman, which is showing at Southwark Playhouse over spooky season. 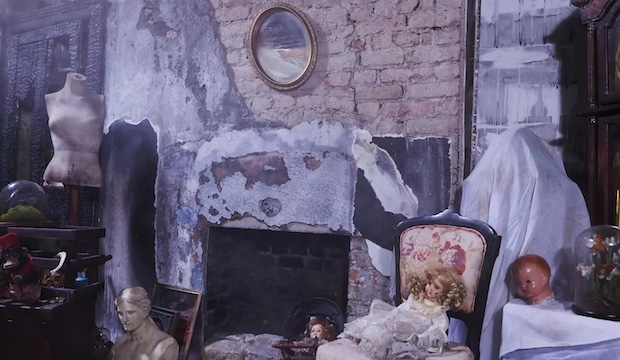 London Dungeon, the creepiest attraction open year-round in the city, is launching a brand-new show in time for Halloween. 50 Berkeley Square invites the brave to step inside the attic of one of the most haunted houses in England. Here, a story of madness, mystery and murder will unfold – with little you can do other than look on in horror. 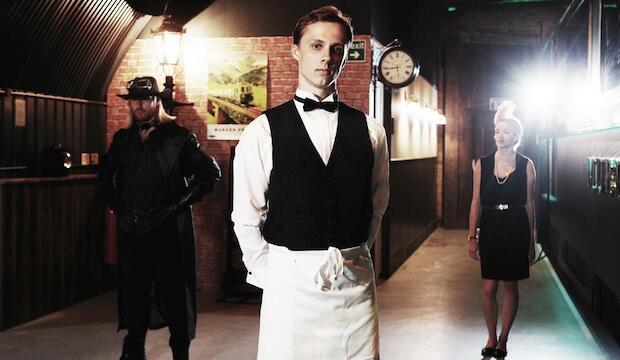 One of Funicular Productions’ signature experiences, The Murdér Express is back with a brand-new story. Part Deux begins like its predecessor at fictional Pedley Street Station. From here, you'll hop on board an elegant but eerie-looking steam train with an ominous-sounding name. Sip on cocktails, tuck in to a fancy feast but don’t get too comfy. This time, there's a precious diamond, the jewel of the empire, which has gone missing on board. Now everyone is a suspect, including you. Look forward to entertainment and storylines from a professional cast, and a multi-course meal from MasterChef: the Professionals finalist and long-term Funicular collaborator Louisa Ellis. 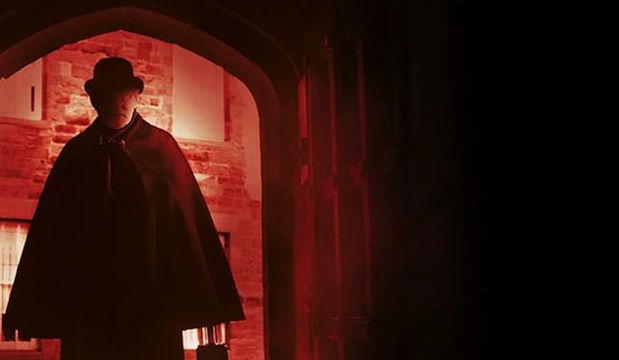 No scene is quite as suitable for Halloween as an ancient, history-riddled castle. At Eltham Palace, you can take a chilling, fantastical journey back in time to the 1930s. Guided by expert storytellers, you’ll hear tales of the sinister goings-on in the servants’ quarters, supernatural sightings and horrible happenings. What really happened at the palace while its esteemed guests enjoyed lavish feasts, completely unaware? The grounds will be dark at this hour so whatever you do, bring a torch and don’t get lost. Suitable for ages 16+.
For little ones, there's also a Beano-themed Halloween Quest offering a sillier take on the supernatural. 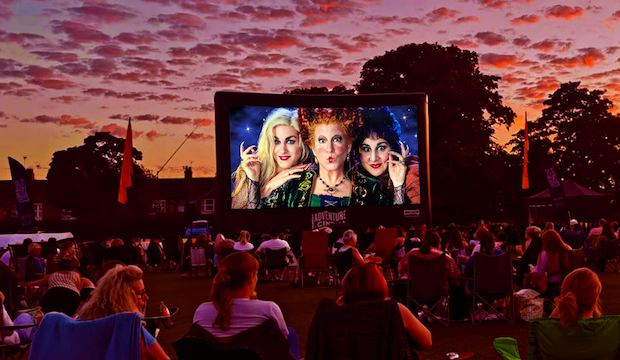 Touring picturehouse Adventure Cinema is hitting the road for Halloween, calling into several of its 39 outdoor cinemas across the UK. The nearest to London is Osterley Park and House, where the brave can watch 80s supernatural classic The Lost Boys on Saturday 29, and families can enjoy seeing Bette Midler, Sarah Jessica Parker and Kathy Najimy play the infamous witchy trio in Hocus Pocus on Sunday 30. 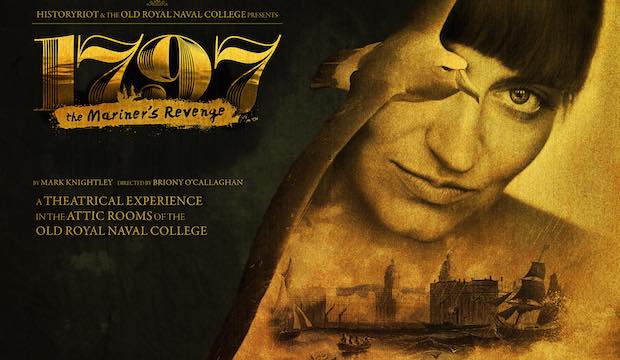 Riddled with history and often shrouded in atmospheric mists at this time of year, Greenwich's Old Royal Naval College puts its dramatic setting to good use in spooky season, hosting themed events. This year, the highlight is an immersive theatrical experience, 1797: The Mariner's Revenge, written by HistoryRiot’s Mark Knightley and directed by Briony O’Callaghan. Fusing physical theatre, puppetry and sea shanties, the story takes audiences into the never-before-opened attic rooms at the top of the historic Admiral’s House, where the infamous Admiral Nelson is dining, while an injured mariner and a temperamental albatross are wreaking havoc above.

Audience members will be offered a rum cocktail (or its non-alcoholic equivalent) on the house for some Dutch courage. The Mariner's Revenge is suitable for audience members aged 15+. 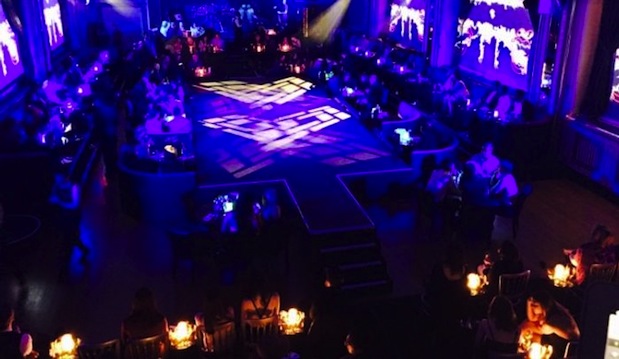 The beautiful art deco auditorium of the Bloomsbury Ballroom is being transformed into a playground for the supernatural this Halloween. The theme? Mexico's Day of the Dead holiday. Come in your most colourful costume and look forward to a specially curated menu that reflects the textures and tastes of the Mexican celebration, and a chance to enjoy world-class entertainment from a candle-lit table. 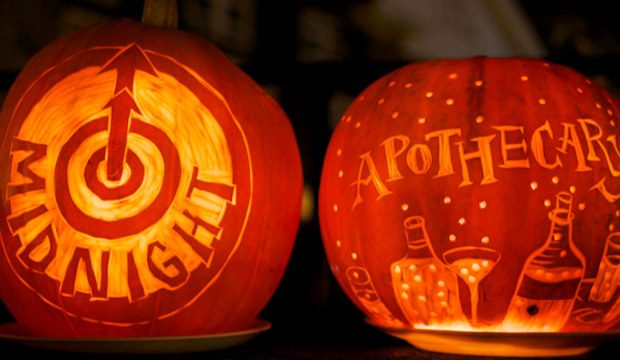 Midnight Apothecary returns to the Brunel Museum with another classy Halloween special. Amid a sea of carved pumpkin lanterns, huddle by a firepit eating s'mores and sipping on your choice of Halloween potion concocted by the team of resident mixologists. There's no food this year (R.I.P 2021's pizza offering) but guests are invited to order takeaways to the bar. Those who dare can also opt to take an actor-led 'spooky' tour down into the underground chambers below the museum.

Halloween at the Tower of London 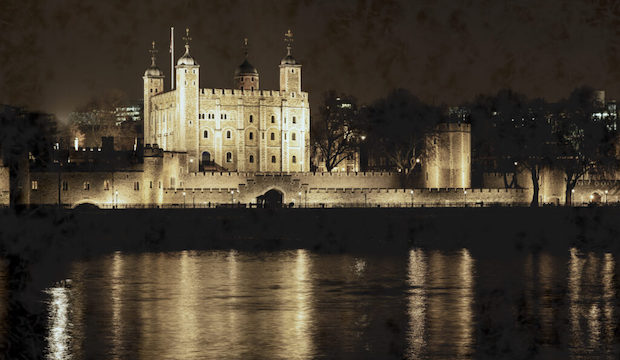 At the Tower of London, the trapped souls of the building's executed prisoners wait to greet you this Halloween. Designed to chill your bones rather than churn your stomach, the tour takes you past Traitors' Gate, the Scaffold Site and the Bloody Tower, with reported sightings of Anne Boleyn, the Duke of Clarence and Everard Digby along the way. 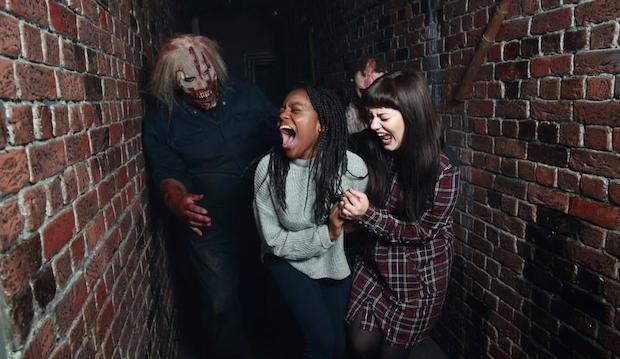 Halloween wouldn't be Halloween without Thorpe Park's annual Fright Nights season – and the screams are just a short train ride from London. Venture into one of three scary mazes, dodge the blades of Creekwood Sawmill, shudder through the cursed village of Mawkin Meadow or simply ride Thorpe Park's most famous rollercoasters in the dark. The thrill-seeking will continue until 10pm during this special season so that you can really immerse yourself in the spooky fun. 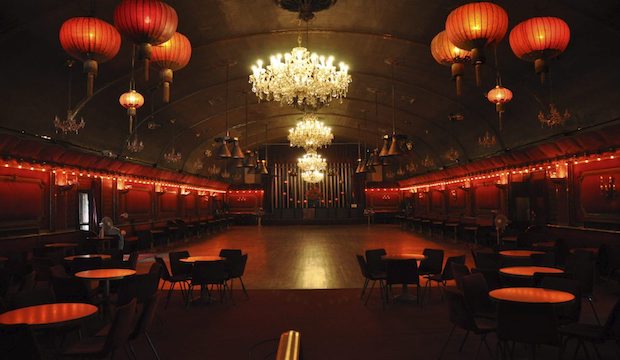 Take in some classic horror at a pop-up cinema in the historic twilit Rivoli Ballroom. The only one of its kind in London, the ballroom was, in fact, originally a cinema before it was converted to a dance hall in the 1950s. Famed for its plush furnishings and fittings, the space has appeared in several films itself. This October, it's screening a ream of spooky classics, including The Shining, Hocus Pocus, The Rocky Horror Picture Show and Carrie. 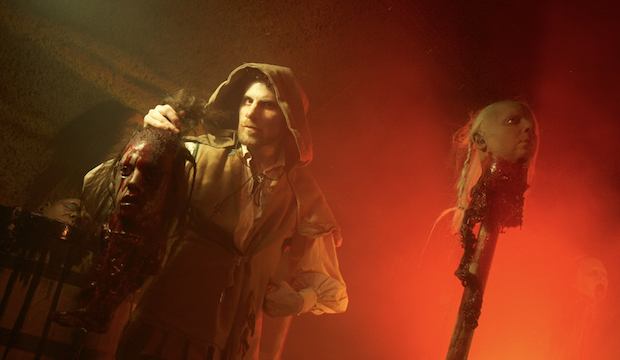 It's open year-round but it's at its spookiest around Halloween: The London Bridge Experience invites the brave to descend into a theatrical maze, where chilling historical figures including Jack the Ripper and William Wallace are lying in wait. Listen to the secrets that stain the history of one of London's most frequented landmarks, but beware: you may find you're unable to ever see it in the same light again.


Halloween Ball at the Mansion 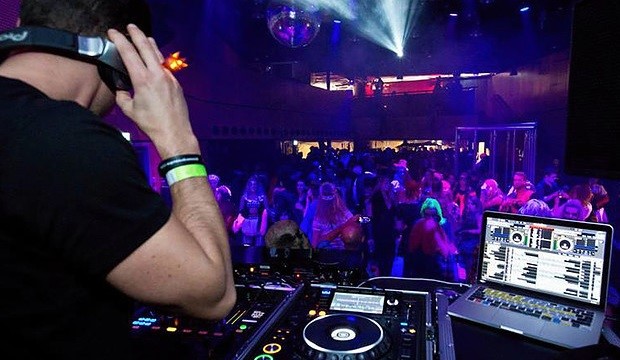 The 'Mansion' is actually a network of specially chosen venues in London so the party team is able to throw great gatherings in an ever-changing roster of grand locations. Halloween is no different. In a brand-new surprise venue, expect three dance floors, a VIP area, spooky entertainment, a tarot reader, a macabre art exhibition and a graveyard guarded by a werewolf. Fancy dress is completely mandatory and so is haste – the tickets always sell out.

Where: Secret northwest London location revealed 48 hours in advance to ticket-holders
When: Saturday 29 October, 9pm – 4am
Click here to book 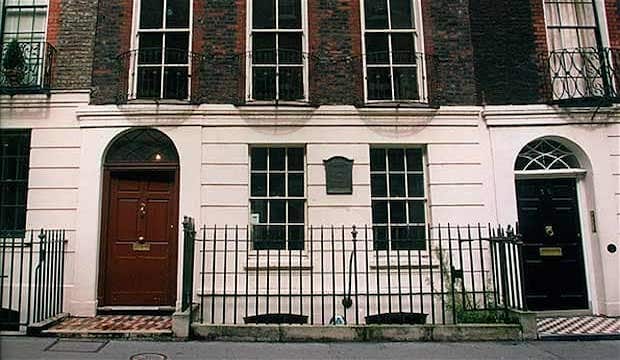 Benjamin Franklin was a stand-up guy. As one of the Founding Fathers of the United States, he was the country's first ambassador to France where he helped spark the French Revolution. Still, there are some cobwebs in his house. This special Halloween tour is a chance to hear about the cadavers (corpses) found in the basement, snoop around candle-lit rooms and listen to Franklin's Glass Armonica. Treats and some tricks are promised along the way. 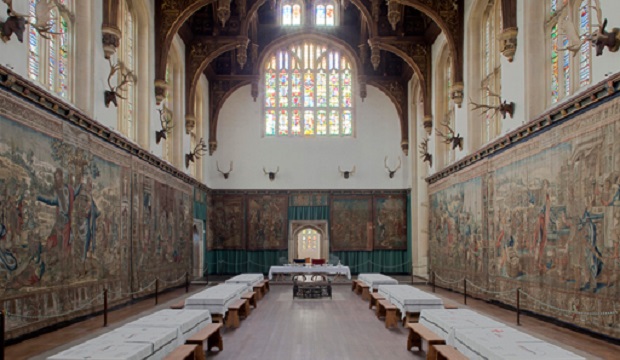 There are ghosts in the gallery at Hampton Court – we've heard it first-hand from the staff. The most famous is Catherine Howard, last seen being dragged screaming back to her room down the haunted gallery, under arrest for adultery. Come find her on a new self-guided Halloween ghost tour for adults. Tickets are £35 each for the late-night special tour. Sceptical? In 1999, two women fainted at the exact same spot on the tour half an hour apart… Ghostly goings-on or a noxious gas leak?