It’s nigh-on impossible to get through a month without the release of a follow-up, spin-off, reboot or spoof. It’s also hard to come across one of these films that doesn’t undermine, maim or butcher the original, or one that leaves you feeling that a sequel was exactly what we needed.

That Blade Runner 2049 manages to cut through this dense fog of films is impressive. That it manages to preserve and polish the stunning visuals and dark heart of its predecessor is outstanding. And that it might just be a better film than the now-seminal dystopian sci-fi movie which inspired it is amazing.

On that point, it might be worth watching the original Blade Runner before you see this film. You could see it without knowing Ridley Scott’s classic – it would still be an astonishingly heady viewing experience buoyed by dazzling cinematography, a monumental score and subtle treatment of the vast future impact of technology and AI on society. However, like a martini without the vermouth, you would be missing that added depth.

But to help fill in the blanks for non-fans: the action follows some 30 years on from the first film in an L.A of the future, a mad melting-pot metropolis of sprawling smog-choked skyscrapers. A member of the modern LAPD, Officer K (Ryan Gosling) acts as a blade runner, a policeman who hunts down replicants – sentient androids once employed as slaves in human colonies on other planets who were decommissioned after a series of revolts.

K has to face both his chief (Robin Wright, at her ice queen best) and the powerful Wallace Corporation, run by Niander Wallace (a super-sinister Jared Leto), to find out the truth behind a disturbing discovery that threatens irrevocably to blur the lines between humans and the automatons. 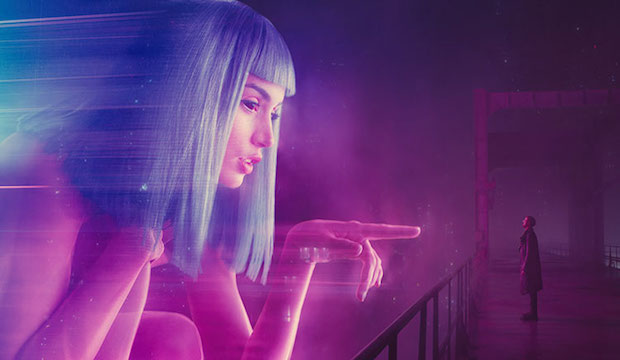 Gosling is the perfect successor to Rick Deckard (reprised here by Harrison Ford), resurrecting a sort of melancholic reticence that recalls his lead roles in Half Nelson or Drive. That warm coolness is matched by the setting, drenched in overwhelming washes of colour or acid rain set on fire by neon lights. But it’s not all spectacle.

Denis Villeneuve, much in the vein of Arrival, has concocted another mixture of style and sentiment. Even as Blade Runner 2049 revels in recreating and renewing every element of the film’s near-future, it dips into real tragedy, as K casts around in his own past, and romance. That romance comes in the form of a mass-produced ‘perfect wife’ hologram (Ana de Armas), which is unfortunate as almost all the women here are some type of machine or technological device. But perhaps this is a failing of the film's source material as well.

In any case, Blade Runner 2049 makes you see the 1982 offering in a new light, which is surely the point. Like that earlier film, so focused on the eye and what we see and what they record, this movie, in many ways, makes you look again.

If only all sequels could do the same.