Transformers: The Last Knight is more fun than critics would have you believe

In Transformers: The Last Knight, Michael Bay packs the franchise with even more epic blockbuster tropes. Here, he pounds your pleasure receptacles to a pulp, with everything from the comedic arrival of robot alien dinosaurs, to a scary crack team of maniacs being released from the prison à la Suicide Squad.

Our story begins with war-torn medieval England, as King Arthur and his army prepare to get blasted into oblivion by advancing enemy forces. Their only hope is Merlin and his magical staff. But, in the modern world, the Transformers are now 'illegal aliens', only, for real, this time, because humanity has had enough of them blowing stuff up for the past four movies. Except for Izabella (Isabella Moner), a daring fourteen-year-old orphan, and Cade Yeager (Mark Wahlberg) who still believe in them.

That's all irrelevant, though, because the world is ending. Quintessa, goddess of the Transformers, is a literal ‘manic pixie dream girl’, and who is literally arriving like a wrecking ball and destroy Earth by crashing another planet into it. 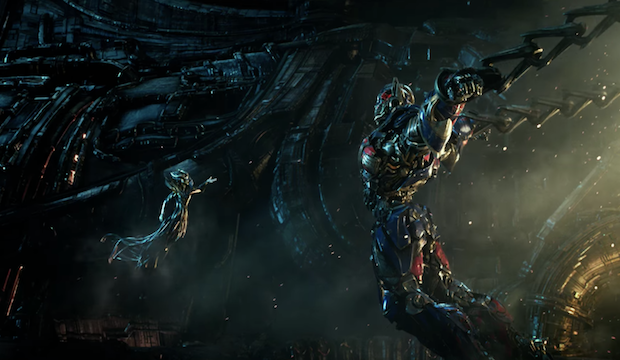 How can this be prevented? Only Sir Edmund Burton (Anthony Hopkins) knows. With his trusty sidekick, a four-foot, steampunk, ninja butler Transformer with anger management issues, Burton enlists the only two people who can help: Yeager and Vivian Wembley (Laura Haddock). Wembley is an Oxford Scholar who can trace her lineage back to Merlin. Their only hope is Merlin's direct descendant who can wield his magical staff.

What happens next is the most ostentatiously expensive relay race in the history of mankind, as the staff of power flies from hand to hand through plot lines and explosion-laden wind.

But the real heroes here are the employees of Industrial Light & Magic, who are no doubt the most under-appreciated artists of the century, as they continue to push the boundaries of realism through CGI. The footage for Transformers: The Last Knight was shot on IMAX digital cameras so the effects look authentic, in comparison to the flat tableaux that characterise sloppy post-production 3D conversion jobs.

Michael Bay is known for cars, explosions, and making Megan Fox audition for the Transformers franchise by washing his car in a bikini. There's loads to love in this movie, because Michael Bay knows what the people want. Including Anthony Hopkins on screen living the life we secretly believe he lives offscreen: residing in an isolated castle in the British countryside, sneaking into 10 Downing Street via secret passage, and saying things along the lines of, 'Don't mess with me, this is the Transformer watch that killed Hitler', with a maniacal grin that also says, 'I can't believe how much I'm getting paid for this tomfoolery, either.'