One of the winners at the Sundance Film Festival, Dina is an intimate documentary of a developmentally disabled couple which rings truer than most scripted romantic dramas

Dina film review 4 Dina film review Daniel Lewis
‘You’re no different from the rest of us,’ Scott says to calm his new wife, Dina — the woman at that centre of this documentary who suffers from a ‘smorgasbord’ of mental difficulties, in her mother’s own words, including autism.

On the one hand, Scott — who is also a high-functioning sufferer of autism — is correct. Dina has recently found a man, moved in with him, organised a wedding and headed off on a honeymoon with the prospect of a new shared life stretching ahead of her.

Dina makes us live through these moments with her, as she works through all the natural anxieties and insecurities that accompany these milestones, like millions around the world.

TRY CULTURE WHISPER
Receive free tickets & insider tips to unlock the best of London — direct to your inbox
On the other hand, Scott is a little bit off the mark. Dina is so much more generously and refreshingly honest than ‘the rest of us’. No doubt, her candidness is due in part to her disabilities. But Dina, you sense, has also learned that there is more to gained from embracing our hectic inner lives than keeping them at arm’s length.

It seems the directorial duo Dan Sickles and Antonio Santini have recognised this aspect of Dina's iridescent character. Avoiding an experimental style to represent these ‘different’ people or shaky fly-on-the-wall camerawork, they have opted for a style as unobtrusive and observational as a box office classic.

At points, it is easy to forget you're watching a documentary.

The scene where Dina gifts Scott a copy of The Joy of Sex and launches fearlessly into a discussion of her sexual desires and Scott’s lack of passion for her could have dropped out of a Woody Allen film. This conversation also confirms our impression of Dina: she has made vulnerability her strength; her openness is her armour.

But this armour has been forged in the fire. 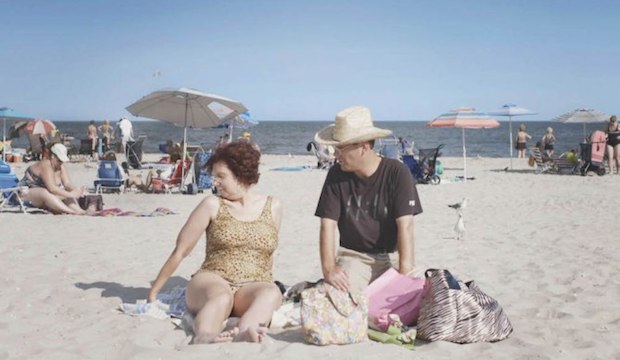 The details of what she has had to fight through emerge slowly throughout the course of the film. She lost her first husband of eleven years to cancer and survived near-fatal violence at the hands of her previous boyfriend.

While watching an innocuous sunset, we listen to a recording of the 911 call that most likely saved Dina’s life. It’s a moving moment and it reminds you that this film is, in fact, a documentary and that there are real and fragile lives at play.

Dina is a slow-burner but, once finished, it enlightens its audience not only about those who live with developmental disabilities but also about the intimate connections we form and those that form us.

Kathryn Bigelow is bearing witness with her film Detroit, and it's complicated
Sign up to CW’s newsletter
By entering my email I agree to the CultureWhisper Privacy Policy (we won`t share data & you can unsubscribe anytime).