Downsizing film review 2 Downsizing film review Dan Einav
It’s almost fitting that a film about a scientific procedure which can make people smaller similarly takes a big concept and shrinks it down into something inconsiderable. Alexander Payne’s (The Descendants) pedestrian new feature Downsizing boasts a strong premise which is quickly marred by complacent storytelling and poor pacing. It is by no means the worst film you’re likely to watch in the next year, but it might just be the most frustrating.

The film’s inventive, surreal premise misleadingly captures our imagination for the first hour or so. In an alternate present, a couple of Norwegian scientists have discovered a way to battle the world’s overpopulation problem by safely miniaturising individuals so that they become only a few inches tall.

Within a few years, ‘downsizing’ is being marketed as a lifestyle choice – little more drastic than cosmetic surgery – which allows one to go live like a millionaire in the idyllic microcosm, ‘Leisureland’, all while helping the environment.

It’s not a completely original idea – after all, Jonathan Swift had conceived of the diminutive Lilliputian people in Gulliver’s Travels about 300 years ago – but it is one that is initially approached with relish. Early scenes introduce us to everyman Paul (Matt Damon) and his wife Audrey (Kristen Wiig), as they deliberate about whether to undergo the procedure. After speaking with a friend (a tiny Jason Sudeikis amusingly perched on a cereal box) who strongly recommends downsizing, they decide to go through with it.

That is, Paul goes through with it only to wake up in 'Leisureland' to discover that Audrey has decided to stay behind. And it's at the point that their marriage ends that film begins to lose its narrative momentum. From about the halfway mark the extent of Payne’s interest in the downsizing concept seems almost limited to using it as a vehicle for some visual gags – the best of which involves Paul having to lie down atop his divorce papers to sign them.

Where it might have been interesting to broach ethical questions about playing god, and to explore how the new small society develops from scratch, Payne simply lets the premise evaporate before our eyes. He eventually stops playing around with the camera perspective so we just end up seeing the minature world as if it was normal sized, making the concept which underpins the whole story a little redundant. 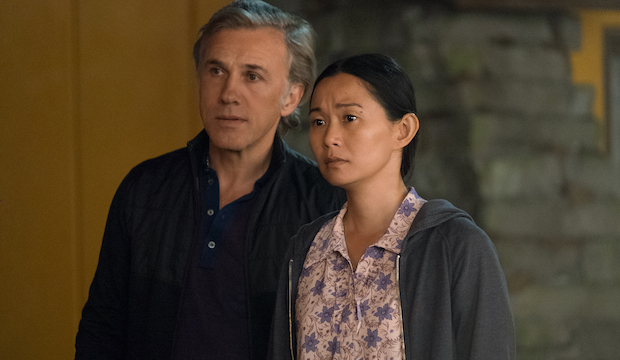 One of the film’s biggest missteps is the way in which it simply drops Kristin Wiig’s part. While it could have been compelling to see how Paul and Audrey attempt to reconcile their marriage despite the size disparity, the narrative instead opts to introduce two new, underdeveloped characters.

The first is neighbour Dusan (Christoph Waltz), a shady Serbian businessman and playboy party animal. Waltz is patently having a blast in this kitschy, eccentric role, and his enthusiasm does help liven up a torpid middle section.

The romantic interest comes in the way of Ngoc Lan Tran (Hong Chau), a cleaner and former Vietnamese dissident who had been shrunk as a form punishment by her native government. She speaks in such broken English, in what is a painfully obvious put-on accent, that it’s hard to view her character as anything other than broad, rather tasteless caricature.

The script also doesn’t do a convincing job in justifying the closeness that Paul feels towards either Dusan or Ngoc Lan Tran, which means we never feel invested in either relationship.

A final act tries to appeal to our environmentalist sensibilities, but like so much else in this film it's done with such heavy-handedness that we leave the cinema with the overwhelming feeling that Downsizing comes up well short of expectations.

Downsizing was reviewed at the BFI London Film Festival. It will be released nationwide on 19 January 2018.