Marshall film review 3 Marshall film review Dan Einav
Chances are that unless you’ve studied US history or law, you’re unlikely to have come across the name Thurgood Marshall. The first black man to be appointed as a justice of the Supreme Court in 1967, Marshall had made a name for himself over two decades earlier as an indomitable lawyer for the National Association for the Advancement of Colored People (NAACP).

There’s no doubt that he’s a figure worthy of a biopic. But while Reginald Hudlin’s film – about Marshall’s defence of a black servant accused of raping his white employer – is a perfectly enjoyable watch, it fails to shed light on the man behind the lawyerly prowess.

Comparisons to classic civil rights courtroom dramas such as Mississippi Burning and, of course, To Kill a Mockingbird, are perhaps inevitable. Though Marshall never threatens to build on those genre predecessors, it stands out in the way that it focuses on an African American attorney (Chadwick Boseman) rather than socially conscious white lawyers who stand up for a black defendant.

Except that’s not really how things pan out here. In some ways, the heart of Marshall rather misleadingly lies with Josh Gad’s schlubby insurance lawyer, Sam Friedman, who is reluctantly brought in to work for Thurgood on this case. It’s not that Gad has more screen time or lines, but his character’s story of personal development is bizarrely more fleshed out than that of the eponymous litigator.

The film clearly establishes Thurgood Marshall as a paragon of virtue. He is a magnetic, almost saintly figure – an unflappably quick thinker, sharp talker and, in one gratuitous scene, a mean fighter. He is also, despite Boseman’s best efforts, a slightly bland leading man.

There are only a few fleeting instances in which we see him display actual human traits such as vulnerability and stress, and while this may be true of the real Marshall, hagiography doesn’t often make for captivating cinema. 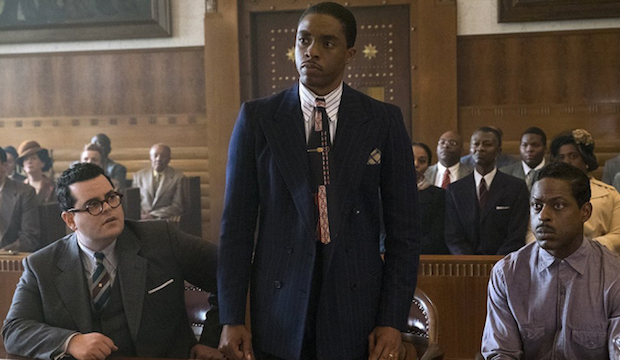 With Friedman meanwhile, we get to see how his time as Marshall’s disciple enables him to progress from bumbling financial litigator into a determined and competent criminal defence attorney.

The film’s real success is the 'odd couple' dynamic that it sets up between Marshall and Friedman. A lively script – barring a couple of glib grandstanding speeches – gives two strong actors plenty of opportunities to draw us in, not least in the courtroom scenes where they spar with the underhanded and waspish prosecutor, played by Dan Stevens.

As for the case itself, one wonders why this particular one was chosen instead of the seminal Brown vs The Board of Education one which Marshall won a decade later to bring an end to segregated schools.

Perhaps Hudlin was just looking for a more entertaining, lurid kind of feature filled with speculation, theories and setbacks. There’s nothing wrong with that, but it does seem like incredibly unfortunate timing for Hollywood to be releasing a film that compels us to be sceptical of the plaintiff’s (Kate Hudson) claims that she has been raped.