Saoirse Ronan stars in On Chesil Beach, an affecting if uneven adaptation of Ian McEwan's 2007 bestseller

It’s rare though that one gets to levy these criticisms at the original author. Ian McEwan himself is credited as the sole screenwriter of this uneven filmic reimagining of his beautifully melancholic eponymous novel, which makes the inclusion of an altered, unsatisfying ending all the more perplexing.

TRY CULTURE WHISPER
Receive free tickets & insider tips to unlock the best of London — direct to your inbox
On Chesil Beach – directed by first-time filmmaker Dominic Cooke – is however, for the most part, a faithful adaptation of text. Saoirse Ronan and Billy Howle are superbly cast as Florence and Edward, the anxious young newlyweds on their honeymoon in a hotel by Dorset’s Chesil Beach. They appear to us like lost children, terrified by the prospect of having to perform the roles of adults and of husband and wife.

Their celebratory dinner is marked by excruciating Pinteresque silences, amplified by a complete lack of score. Deft camerawork takes us below to the table to reveal feet tapping nervously, fingers digging into the upholstery. The sense of suffocating tension is so palpable that we as the audience can barely stop ourselves from squirming in our seats. 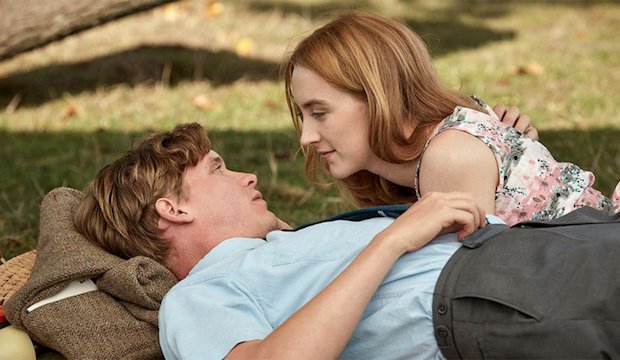 This strand of the narrative is set in 1962, a period just before the sexual revolution swept through English youth culture. Edward and Florence had never discussed sex and now the expectation of having to consummate their marriage hangs above them like a dense coastal fog. Edward is overcome with anticipation, Florence with fear and revulsion. One fantastic shot of the two locked in an embrace captures the irreconcilable gulf between them; Florence claws at Edward for some support, while in the mirror we see him excitedly try to undo her zip.

Punctuating these scenes are flashbacks which provide context into how the couple met and the families from which they were hoping to escape. These constant chronological shifts are at times a little jarring – at one point there’s even a flashback within a flashback – but they do serve to make the characters well-rounded, and Ronan and Howle do a good job of making us believe that the relationship was not doomed from the start. When cheery scenes of halcyon days are intercut with the unbearable awkwardness of the film’s present, it moves us all the more to see how distant the couple have now become.

So far, so good. But the story is then frustratingly undermined by an emotionally manipulative coda. Like the book, the film revisits Edward late in life after the disintegration of his marriage. But where the novel was subtle and concise in its meditation on remembrance and regret, here the point is made with such shameless transparency (and risibly bad prosthetics) that it undercuts the pathos of the original story. A two-hour runtime also transforms a masterfully taut novella into a rather protracted affair.

As a standalone feature this is undoubtedly an affecting and wonderfully shot feature, but it’s unlikely to surpass Atonement as anyone’s favourite McEwan adaptation anytime soon.