1 CW reader is interested
The Glass Castle film review 2 The Glass Castle film review Dan Einav
Woody Harrelson spends the entirety of his screen time in The Glass Castle sporting an unconvincing toupee. This might seem like a trivial point to focus on from the outset, but Harrelson’s wig and this prosaic real-life drama from director Destin Daniel Cretton (Short Term Twelve) share many of the same traits. Both, for example, are needlessly overlong and could have done with some more judicious pruning. Both are marked by an unmistakable artificiality, and both, perhaps most importantly, vainly attempt to conceal or even deny the existence of the harsh reality that lies beneath the surface.

TRY CULTURE WHISPER
Receive free tickets & insider tips to unlock the best of London — direct to your inbox
The Glass Castle is based on the bestselling memoir of the same name by Jeannette Walls, which chronicles the journalist’s difficult, nomadic childhood. The narrative is dominated by the mercurial paterfamilias Rex (Harrelson), a heavy-drinking man who can switch from doting to menacing in the time it takes to knock back a shot of whiskey.

It’s essentially the same role played by Colin Farrell in the P.L. Travers biopic Saving Mr Banks, another film in which it rapidly transpires that dad’s ‘fun’ antics are fueled by unsustainable amounts of boozing. In one particularly distressing scene, we see what happens when the raging alcoholism kicks in, as liquored-up Rex tries to ‘teach’ a young Jeanette to swim by repeatedly throwing her into the deep end of a pool.

Mum Rose (an underused Naomi Watts), is almost as cruel through her negligence. A delusional artist, at one point she lets her daughter risk her own life so that she can finish a painting. Similar traumatic episodes of callousness pile up to create a portrait of unpalatable parental abuse.

But the film’s unforgivable flaw is its tonal confusion and lack of moral scrutiny. Time and again the script equivocates, trying to amplify the moments of levity and downplaying the genuine abuse so that Rex and Rose appear to us as simply ‘unorthodox’ parents; towards the end, there’s even a nostalgic reminiscence about how ‘life was never boring’. 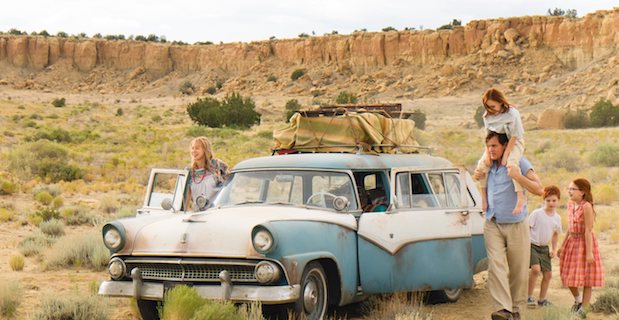 There are, at least, some solid performances. Harrelson, though rather hammy, largely does well to tread that fine line between benign zaniness and dangerous unpredictability. Best of all is Ella Anderson playing the young Jeannette, a child trapped between an innocent reverence of her father and the heavy-hearted realisation that he’s a despicable person.

These scenes showing Jeannette growing up are far stronger than the story arc taking place set in the late 1980s, which see an adult Jeanette, played by Brie Larson, who has become a successful writer, a Manhattan socialite, and is engaged to a financial analyst. But her parents, squatting in a nearby derelict building, still hold a vice-like grip on her and her adult siblings.

It’s a story that could have been affecting in the hands of a more subtle and responsible screenwriter and director. Instead, the final act serves us up with such a vast quantity of syrupy banalities that you’ll have reached your weekly allowance for sugar intake by the time the credits roll.