Jupiter's Moon film review 5 Jupiter's Moon film review Matthew Robinson
We don’t believe that Jéger Zsombor is actually flying in Jupiter’s Moon. But Hungarian director Kornél Mundruczó is such a talented director, capable of making scenes both dreamily surreal and breathtakingly immediate, that he achieves the next best thing. When you watch Zsombor start to levitate, you feel the same tingling rush of apprehension and awe that you might if he did it three feet in front of you. It’s not belief, but it‘s the closest thing to it that cinema can manage. 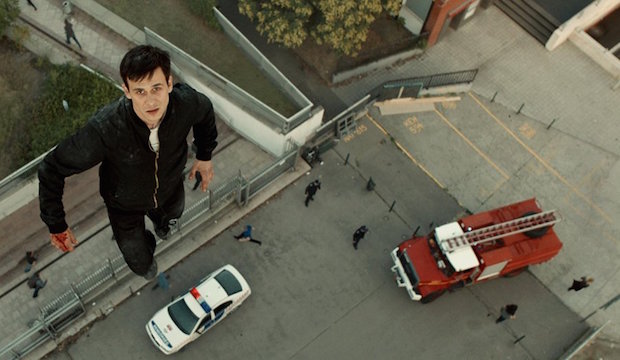 Zsombor’s character only starts floating up after he’s been gunned down. Aryaan is a Syrian refugee, and we first meet him as he’s being smuggled into Hungary with dozens of others. It’s a tense opening that blows up into the worst-case scenario when police open fire on the boats and Aryaan is separated from his father in the confusion. Running through the woods, he emerges into a clearing, only to be shot by dishevelled government agent László (György Cserhalmi). Instead of collapsing to the ground and bleeding out, though, he finds himself alive and slowly pinwheeling into the sky.

It’s a moment that gets repeated several times throughout Jupiter’s Moon. Each time it feels genuinely miraculous. There’s something truly biblical about it, even when the circumstances that cause it to happen are less than saintly.

Dr Stern (Merab Ninidze) is a dyed-in-the-wool cynic, likeably shabby and totally corrupt. He’s the kind of doctor to end up drunk at the operating table and accidentally kill a patient, which is what in fact has happened. He now works at one of the internment camps for refugees, accepting bribes for favours, trying to make enough cash to persuade the deceased’s family from filing a lawsuit. Money isn’t the first thing on Stern's mind when he treats the bullet-riddled immigrant and discovers the astonishing power – he’s not that cynical – but it is the second thing on his mind. He breaks Aryaan out of the camp and makes a deal with him.

Thus begins a migrant labour exploitation like no other, a series of mountebank demonstrations of unique authenticity, with the dogged László in cold pursuit. It’s a solid plot that does the job of transporting the audience between moments of wonder. A Mary Poppins-style descent down the side of a building shows the private lives of the inhabitants; a racist skinhead receives a breath-taking form of divine retribution; dying women get to witness an actual miracle.

Such standout moments are the reason to watch Jupiter’s Moon, and they more than compensate for the inconclusive ending and the rare script stumbles. In concept, the film echoes Mohsin Hamid’s recent novel Exit West, another magical-realist refugee story, and its execution recalls Alfonso Cuarón’s Children of Men (from which Mundruczó has clearly learned about naturalistic tracking shots) and the woozy memory sequences from Ari Folman’s Waltz with Bashir. In the end, though, it is Mundruczó’s own vision, imperfect but regularly astonishing.