Jake Gyllenhaal battles strong emotions in Stronger, a true story drama about a famous survivor of the 2013 Boston Marathon bombings

Patriots Day felt like the cinematic equivalent of getting through a generous helping of cherry pie and a bottle of bourbon while listening to an extended rendition of ‘The Star-Spangled Banner’ by Mariah Carey with a fireworks display in the background. That is, quite enjoyable and very American.

In comparison, Stronger –– a much quieter affair –– seems downright unpatriotic, even though it’s all about being ‘Boston Strong’.

We follow Jeff Bauman, who managed to identify one of the Boston bombers, as he deals with the loss of his legs during the attack. Stronger reveals how the city’s enthusiasm to make him a symbol of their recovery efforts and pride competed with his own personal journey to recovery, both physical and mental.

That struggle is expertly conveyed by Jake Gyllenhaal in one of his most convincing and sincere performances as he shows Bauman’s reluctance, and genuine inability, to engage in the media circus that usually surrounds survivors of such tragedies –– being rolled out to wave the flag at ice hockey matches, to throw first pitches at baseball games or to do interviews with Oprah.

All this plays second fiddle to his rocky relationship with his on-and-off girlfriend, Erin (an accomplished performance by Orphan Black-star Tatiana Maslany), whom Jeff turned up to the marathon to support. As well as each other, the couple has to contend with Bauman’s alcoholic mother, Patty (Miranda Richardson) with whom they share a cramped two-bed apartment and who has high hopes for Jeff’s newfound fame.

All these conflicts go deep and pack gut punches which feel distinctly Bostonian in their toughness. 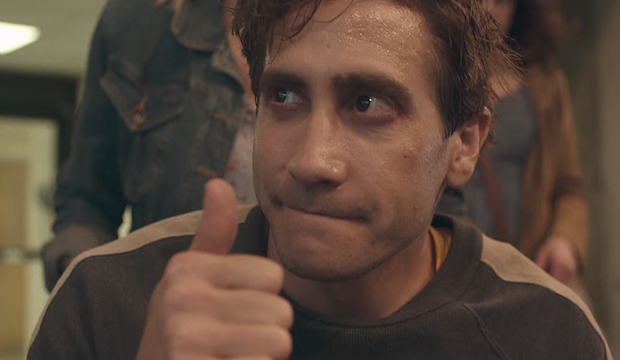 But Stronger also attempts to temper the rough with smooth. The drama is peppered with touching moments –– a standout scene being Bauman’s strained conversation with the man who helped him to paramedics immediately after the explosion –– which feel neither cloyingly sentimental nor prescriptive.

There’s no universalising going on here; Jeff Bauman isn’t your usual role model (he nurses a bad drinking habit himself) which is much to the film’s credit.

At times, Stronger appears to lose all sense of direction, a forward thrust. But by resisting the urge to charge into an All-American gung-ho or ‘inspirational’ movie clichés, which are always on its fringes, it reveals itself as surprisingly complex and emotionally robust stuff.

It might just offer another definition of what it means to be ‘Boston Strong’.