Happy End is an enthralling and raw drama – in other words, a typical Michael Haneke film

It’s not hard to think of that masterpiece when viewing Happy End, the Austrian director’s twelfth feature film which is similarly cheeky with its title: in Haneke’s world, happy endings are hardly ever an option. It’s been suggested that this may be his directorial swansong, in which case the title would be a fitting epitaph: until the end, the German-speaking auteur has kept enthralling us, and this new chapter is no exception.

The palpable dread is present from the very beginning, with video footage that sets up the mood, if not necessarily the plot, before moving on to the start proper, a workplace incident that triggers a family crisis. As the various participants (including Isabelle Huppert, Jean-Louis Trintignant, Mathieu Kassovitz and Toby Jones) meet for a fateful get-together in Calais, tensions continue to mount, paving the way for various iterations of hurt and resentment.

The European refugee crisis serves as a backdrop, but topicality has never been a major point of interest for the director, whose typically misanthropic outlook merely uses these elements, which also include the aforementioned new media material, to reinforce his study in utter, hopeless despicability. After the sincere tenderness of Amour, this is vintage Haneke, albeit with slightly less raw power than usual. The usual outbursts of overt cruelty, while present, are more subdued, and audiences will still gasp for air come the final shot, just perhaps not as forcefully as one might expect.

That being said, even a seemingly minor piece of work in the Haneke canon (see the aforementioned Funny Games redo for English-speaking viewers) counts as essential viewing, and Happy End is no exception to this rule. Untarnished by age or familiarity, the apparent coldness associated with formal precision remains as strong and engrossing as ever, provided that one is willing to embrace this very dark journey. 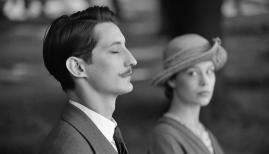