Get Out film review 4 Get Out film review Matthew Robinson
It’s not quite as outrageous, but there’s a touch of Elle about Get Out. Just as Paul Verhoeven dialled up the subtext of his rape-revenge-thriller until it was impossible to ignore, Jordan Peele makes his horror movie explicitly about race. It’s not just that there’s a social critique buried somewhere in Get Out – the critique is front-and-centre from the beginning, and Peele derives delirious, delicious horror out of it.

Chris (Daniel Kaluuya) is about to meet the parents of his girlfriend Rose (Girls’ Allison Williams), and he’s wary – Rose hasn’t told her white parents that Chris is black. She sees no problem with this, assuring Chris that her parents couldn’t be more liberal (they voted for Obama!). Chris has his reservations, but is too polite to keep mentioning them; Rose can afford to be blasé.

Similarly, when the couple encounter a policeman on the drive to Rose’s family home, the white girl can afford to be indignant when the cop asks for Chris’s driving license (he wasn’t driving). Chris himself is conciliatory and compliant, for obvious reasons. While Rose stamps her feet, he looks amused and frightened by a situation that could so easily go sour for him.

Peele’s film succeeds by maintaining its eye for prejudice, even when it starts segueing into horror-movie territory. Get Out keeps jabbing at white pretentions and hypocrisies while also providing jumps and chills, and while the denouement isn’t hard to guess (Rose’s mother is a hypnotist, her father is a neurosurgeon, black people have been going missing), it’s incredibly entertaining to watch the film reach it. 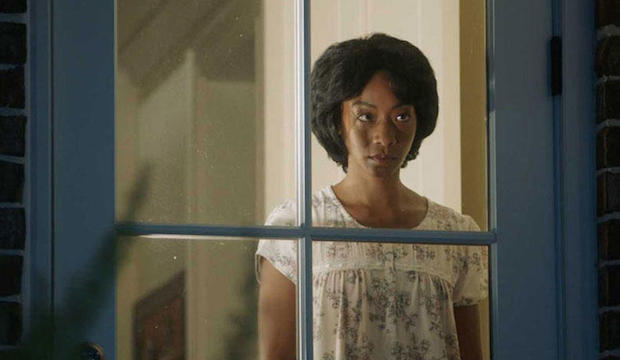 Betty Gabriel in Get Out

Peele is half of the comic-skit duo Key & Peele, but the film’s moments of broadest comedy, mostly featuring Chris’ wise-cracking friend Rod, are some of the weakest. Interestingly, Peele is much better at the sneakier, smaller-scale gags, the ones that induce uneasy or sympathetic laughter. Although the finale of Get Out is satisfyingly excessive, it’s the wryer moments that stand out.

Much of that wryness comes from Kaluuya, who is something of a revelation. The last time he had a lead role was in one of the more upsetting and poignant Black Mirror episodes, and he more than justifies his return to centre stage. He offers a great line in deadpan reactions, and expertly handles Chris’s transition from tickled to perplexed to appalled to vengeful. This satirical shocker wouldn’t be half as good without him. 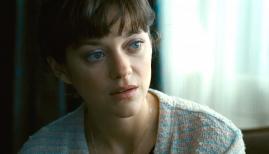