The Student film review 3 The Student film review Matthew Robinson
Veniamin Yuzhin (Pyotr Skvortsov) has discovered religion. It’s not apparent where he discovered it, but it’s clearly not just an excuse to get out of swimming lessons: his every other sentence is a Bible quote, and ­– most shockingly – he’s even resisting the temptations of sex. Is there any greater demonstration of puritanism that a teenage boy can give?

If it’s a mystery as to how Veniamin came to appreciate Christianity, its appeal to him is clearly linked to his age. The discipline and certainties of religion offer comfort to someone suffering from the upheavals of adolescence, its doctrine providing channels for his conflicting urges and aspirations.

There’s also the fact that he’s the kind of spooky, black-clad teen who has always felt alienated from his peers. In the Bible he has found affirmation of his hatred for them. They’re not just dumb, ostracising cretins: they’re sinners, addicted to vice, who will pay in hell for their enslavement to the pleasures of the flesh.

As should be obvious by now, Veniamin is a total prig. His peers know it, his liberal teacher Elena (Viktoriya Isakova) knows it, and his mother must suspect it when, angry at her divorce, he tells her that ‘the adulterers and whoremongers, God will judge’. But the most interesting thing about The Student is the way in which Veniamin’s convictions strike a chord with the more conservative members of staff at his school. 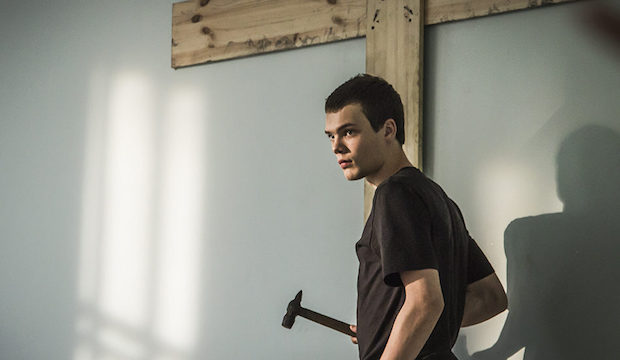 This is where director Kirill Serebrennikov’s film feels most timeless and timely, demonstrating the ways in which youthful extremism finds sympathy from a conservative establishment, tapping into old fears and prejudices that seemed to have fallen out of favour in a more liberal age. Elena, sanely describing puberty as ‘a temporary mental disorder’, finds herself in conflict with her older, dowdier colleagues, who mistrust her atheism and pragmatism. ‘You really enjoy being so modern,’ they sneer.

The stage is set for debate. The problem is that the stage is especially stagey (it wasn’t surprising to learn, in the end credits, that The Student was based on a play), and that the debate isn’t as complex as it could have been. It also doesn’t entirely work as a drama, with Elena’s growing obsession with the Bible failing to convince.

There’s plenty that’s engaging about The Student, though. There are some nice deflating jokes at Veniamin’s expense, and a particularly intriguing suggestion that Russia never really became atheistic under Communist rule, but simply transferred its worship on to totalitarian dictators. The need to submit isn’t confined to schoolchildren.