Directed by Zhang Yimou (Hero, House of Flying Daggers), The Great Wall is a great disaster, in part thanks to a pancake-flat performance by Matt Damon (The Martian, Interstellar)

They were wrong. Rather than using Damon as a white-saviour figure, the film seems to represent a fair-minded cultural collaboration between China and the US. The plot of The Great Wall argues that the world’s survival depends on the East and the West combining their respective talents. The quality of The Great Wall, however, demonstrates that such combination can also be a horrible disaster.

Pursued by bandits, mercenaries William (Damon) and Tovar (Pedro Pascal) wind up at the Great Wall, where they’re captured by The Nameless Order. The Order and their Wall are the last-line defence against green alien quadrupeds called the Taotie, which besiege the Wall every 60 years in an attempt to get to the capital.

William and Tovar are kept alive by the Order because of their valuable combat skills, but they have a secret – they’re actually on a mission to steal gunpowder, something only the Chinese have managed to create. But while fighting alongside the sexy Commander Ling (Jing Tian), William starts to wonder whether he’s found a battle worth more than money; Tovar, on the other hand, is tempted by the silver tongue of Sir Ballard (Willem Defoe), a European prisoner who is planning to steal the gunpowder and make an escape.

That’s almost too much summary; it implies a level of plot, characterisation, and interest that The Great Wall simply can’t muster. Without even trying – in the next, say, forty seconds – you can almost certainly imagine a better film than The Great Wall, based only on the above plot précis. You could probably direct a better film, too, given only a little more time. 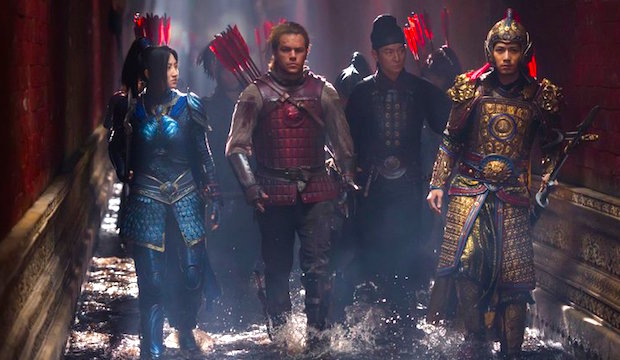 The Great Wall is bilingual, but only one of the protagonists can actually speak both of the languages involved; this means there are several scenes in which plot is explained in Mandarin with English subtitles, then again by a translator. Accordingly, there is no one on the planet who won’t understand what’s being said, and no one who won’t wish that they couldn’t.

Despite this ­­­­­­linguistic concession to the global market, the Western actors all deliver their lines with condescending over-enunciation. Jokes suffer accordingly. Making things even more uncanny is Damon’s accent, which vacillates so unpredictably that it causes the aural equivalent of motion sickness. Even lines like ‘I need a shot!’ and ‘what was that?’ sound distorted and distracting, leaping from Boston to Brideshead in a single syllable.

Issues of dialogue and acting shouldn’t be enough to totally capsize a fantasy-action film, but director Zhang Yimou has managed to screw up the important bits – the pacing, the fighting – almost as astronomically. Zhang directed 2004’s House of Flying Daggers, but nothing in the muddy, ham-fisted Great Wall recalls the clarity and inventiveness of the earlier film’s bamboo fight or whippy-sleeve-bean-drum scene.