His ability to translate pages to frames hasn’t waned yet, no matter what anybody says. Billy Lynn’s Long Halftime Walk is a successful, wildly underrated adaptation of Ben Fountain’s novel.

It’s 2007, and nineteen-year-old soldier Billy Lynn (Joe Alwyn) has recently been filmed doing something spontaneously heroic in Iraq. His bravery in the heat of battle has become national news, and so he and the rest of Bravo Squad have been on a nationwide ‘victory tour’, culminating with a visit to Texas Stadium for an appearance at the football game’s halftime show.

Here, at the stadium, is the American experience in all its self-mythologizing, contradictory, Gatorade-fuelled hallucination, an experience almost as bewildering as fighting in the Middle East.

There are consolations in the form of free alcohol, friendly cheerleaders, and the assurances of a producer (Chris Tucker) that he can make a blockbusting movie of their lives. But the kids of Bravo Squad are tired and emotional, and bugging out at the sheer amount of attention and phoniness coming their way (‘Bravo Squad’ is itself an inaccurate media appellation). They're still mourning one of their men, and fireworks are bad for PTSD. 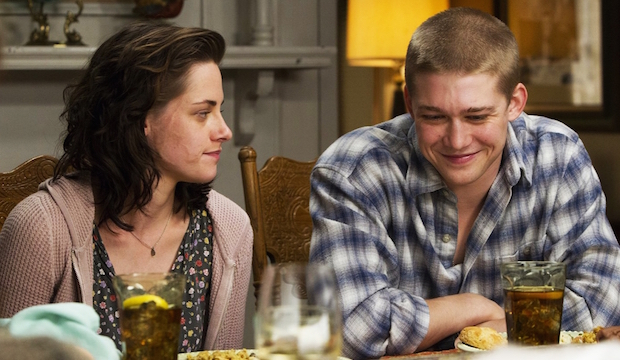 Struggling with the lameness of this anti-climactic, calorific tribute, Billy and the Bravos are forced into the company of clueless philanthropists eager to rub shoulders with heroes, of mountainous football players childishly curious about guns and ammo, and of civilians who seem either misguidedly jingoistic in their gratitude or snarky in their ignorance. Shunted everywhere by co-ordinators who unironically use the language of war to choreograph the show, Bravo Squad approach a breaking point that actual war never pushed them to.

Lee has used a high frame-rate that is initially jarring and almost unanimously derided. The fuss is unwarranted. Yes, it’s uncinematic (if only by dint of being unlike most cinema), even ugly at times, and perhaps wouldn’t work for most films. But where it felt cheap in a fantasy like Peter Jackson’s CGI-heavy Hobbit trilogy, it perfectly captures the kind of hyper-reality that Billy Lynn is all about.

Lee’s film feels peeled. Not just in the battle-scene flashbacks, but also in the stadium: under the high-intensity floodlights, the garish, grisly bounteousness of America is on embarrassing display. The sheer surface of the film makes you twitchy, and the characters themselves all look vaguely bloodshot. Billy’s quest throughout the film is for Advil.

The flashbacks to Billy’s return home, and his relationship with his doting sister (Kristen Stewart), are less successful. The frame-rate is uncanny and fake-looking here, and it doesn’t help that the familial tensions feel trite. Lee can be a sentimental director, and Billy Lynn is not free of his most mawkish tendencies.

Thankfully, they’re balanced out by the presence of Sgt. Dime (Garrett Hedlund), Bravo Squad’s bitter guide. His moral wit alternates between dry and venomous – he’s given to apothegms like ‘every man’s penis has the same IQ’, and ‘talk is cheap but money screams’ – and Hedlund’s performance is the film’s highlight.

Billy Lynn’s Long Halftime Walk can be broad, and is perhaps too neatly ended, but it’s a sympathetic, funny, and sad look at an aspect of America that boggles the mind and sandpapers the eyeballs.

In cinemas this weekend: Brad Pitt battles assassins on a bullet train
Sign up to CW’s newsletter
By entering my email I agree to the CultureWhisper Privacy Policy (we won`t share data & you can unsubscribe anytime).