When the bullet strikes you, there’s a huge jolt like an electric shock. It knocks you over and, as you lie in the searing midday sun in a pool of your own blood, you feel like you’re melting. There’s also a huge weight pressing down on your whole body; it feels so much like gravity has increased that you suspect, in your delirium, that something science-fictional has happened to you – perhaps the sniper shot you with an anti-matter gun? Anything is possible in this strange new reality.

That’s just the sensation of being shot, of course. When you’re heavily pregnant, when you’re lying next to your motionless boyfriend (shot seconds after you were – ‘Baby…?’), when you can hear huddled survivors debate whether it’s worth breaking cover to save you, or if it’s ‘too late’… As one testimony in Tower sums it up, how do you describe the colours of the rainbow to someone born blind?

On Monday 1 August, 1966, former Marine sharpshooter Charles Whitman entered the University of Texas’ main building with an arsenal of various weapons. Having already murdered both his mother and his wife, Whitman shot several more unfortunate people on his way up the 28th floor, where he set up a sniper’s nest and opened fire on the campus and surrounding streets below. He killed seventeen people – including the unborn child mentioned above, and a man who died decades later from bullet-wound complications – and injured thirty one others before being shot by police.

Tower isn’t about Whitman. It doesn’t even mention him by name. Instead, it’s the story of those survived his attack and those who stopped it. Blending testimonies with ‘rotoscope’ animation (see the trailer above), it reconstructs the 96 minutes of panic and bravery that occurred while Whitman was shooting, and touches on the aftermath. 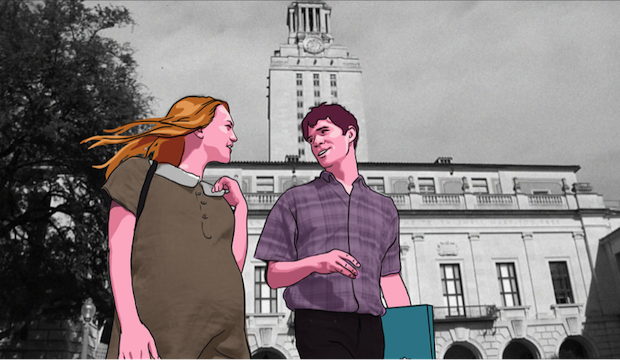 The animation, although not as consistent or smooth as that of (say) Waltz with Bashir, is effective and involving, and bolstered by testimonies that are as extraordinary as such testimonies usually are.

No matter how simple the language used, it’s almost always skin-prickling to hear people impart their experience of the extraordinary. One man describes how, fifty years later, there’s still ‘a cold spot I can feel on my back… it’s about the size of a grape… the place I expected the bullet to come in’.

This particular man was a bespectacled seventeen-year-old who sprinted out into the crosshairs in order to drag the aforementioned pregnant woman to safety; Tower is as good as Paul Greengrass’ United 93 in conveying the beauty of courage, particularly of those from who it was never expected.

It has no ambitions beyond being incredibly tense and moving. The story’s political resonances – gun control, violence as inculcated by American society, police shootings – aren’t given a look-in. Tower is almost exclusively an act of memorial. It restricts itself to immersion – to the important business of recreating, among other things, the circumstances in which ordinary people prove themselves to be anything but.