4 CW readers are interested
Moonlight film review 5 Moonlight film review Matthew Robinson
And now we can all breath a collective sigh of relief. Masculinity, with a definitive, non-ironic capital ‘m’, has finally taken centre-stage – in all its fragility, complexity and fluidity. And, thankfully, it has received Hollywood's greatest accolade for doing so.

This is not to say that films about men who are young, poor, black, gay and/or lonely do not have somewhere to go. And it’s also not to say that unsettled Masculinity has not been approached before. In fact, you could claim Moonlight is resting on the crest of a wave of works tackling the subject in their own way this last year or so – from books (such as ‘sleeper hit’ bestselling novel, A Little Life) and music (Frank Ocean’s much-lauded and adored Blonde, which shares Moonlight’s atmosphere of troubled quietness) to, of course, film (Manchester by the Sea, for example. That was nominated for Best Picture at the Academy Awards like eventual winner Moonlight, and also outstanding) plus many more besides.

But it is to say that this film, in its gentle scrutiny of the many and varied issues at the heart of American society and the black community, is the best thing yet. And what is truly remarkable is that the film manages to uphold its general relevance while maintaining a firm focus – no panoramic shots, mainly close-ups – on one man, Chiron, his coming-of-age story, and the handful of people who make an impact on it. 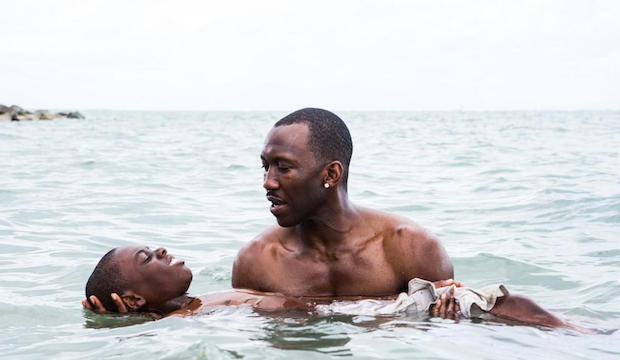 There are three chapters: ’Little’, ‘Chiron’ and ‘Black’, the three names he's known by as he journeys from childhood to adolescence and adulthood, portrayed by three different actors – all brilliant, with a surprising consistency of character, although Trevante Rhodes’ exquisitely subtle performance as the adult Chiron perhaps edges ahead.

Chiron’s negligent drug-addicted mother looms large, and Naomie Harris – the only actor to appear in all three of the film's acts – puts in a career-best performance. Mahershala Ali (familiar from Netflix shows House of Cards and Luke Cage) plays Juan, bucking stereotypes as Chiron’s reliable surrogate father figure and role model who also happens to be the local drug dealer feeding Chiron’s mother’s addiction. The scene in which he teaches Chiron how to swim, fully plunging into the blue that envelops the film (most frames feature the colour and the Miami coast is never far off) is full of the turbulence and tenderness of this relationship – a relationship buttressed by Juan’s partner, acted by an endearing Janelle Monáe. 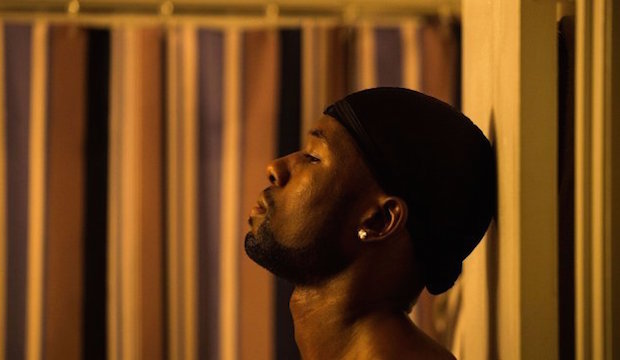 There is also, significantly, Chiron's best friend Kevin – similarly played by three separate actors – with whom Chiron as a teenager has his first and, we glean, only meaningful sexual encounter.

A recent article published in The Guardian has taken issue with the sexlessness of the film: this absence, it says, is a factor in its mainstream success. But the film more than makes up for this supposed lack: in its moments of held eye contact or its avoidance, the clutch of a hand or the sight of an emotionally vulnerable man nestled in the nook of another man’s neck (amazing how rare that image is even today), which manage to produce an intimacy more convincing than a decade’s-worth of sex scenes. 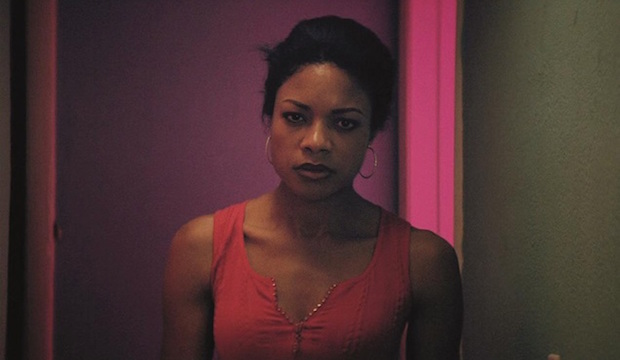 Admittedly, you may feel the absence of sex when you watch the film; but hopefully you’ll realise that what's missing is not in Moonlight itself but outside it, in that huge gulf between the film and those that aspire to be like it.

Here, there is not a single hint of that easy Hollywood sentimentality or melodrama: no self-regarding monologues, no streams of tears, no redemption stories, no earth-shattering epiphanies. Just the hum – sometimes comforting, sometimes unbearable, always unavoidable – of subtext, struggling to rise to the surface, to express all these characters have not been taught or allowed to. And when it does emerge, it does so quietly but to devastating emotional effect. As a result, it is a film that gathers rather than diminishes in significance once you leave the cinema, like a tide swelling behind your back.

And now there’s no space left to mention the beautiful score. Or cinematography.

A wave, somewhere, has broken.