Fences film review 4 Fences film review Matthew Robinson
Set in 1950s Pittsburgh, Fences focuses on the life of Troy Baxter (Denzel Washington) and his family. Directed and produced by Washington, Troy’s story of fatherhood, marriage, and family life in the ’50s is based on a play of the same name written by August Wilson, performed and directed onstage in 2010 (again by Washington).

Troy believes that the only way to get ahead is to have an honest job and live according to hard truths, a conviction formed by his experiences as young man: despite being exceptional skilled at baseball, he’s spent most of his years working as a waste disposal man. This puts him at odds with his sons – teenager Cory (Jovan Adepo) has aims to fulfil his own potential to play football at college, while estranged 34-year-old Lyons (Russell Hornsby) has spent his adulthood pursuing the life of a jazz musician.

The relationship between a disappointed father and his ambitious sons shows how society changes in generational leaps; Troy is unchangeable in his opinions. Over the course of the film we see the familial strain increase.

But arguably the main focus of Fences is the relationship between Troy and his wife Rose, with Rose managing Troy and his out-dated and sometimes irrational views. While this dynamic shows Washington at his best, for many Viola Davis, playing Rose, will be the standout star of Fences. Rose’s strength and resoluteness is portrayed in such an affecting manner that audience tears are almost as guaranteed as Davis’ Oscar victory.

The transition from stage to screen is clear from the beginning. Everything about Fences feels like a play – scenes are predominantly based in the garden or around the house, with exits and entrances virtually marked ‘stage left’ and ‘stage right’. There are also significantly placed props, like Troy’s old baseball bat and ball from his glory days, catching the eye throughout every interaction as it would on stage. 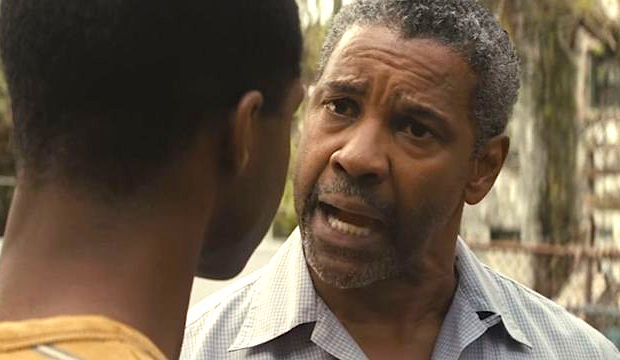 That’s not always the case. Washington’s use of Pittsburgh as a backdrop in several scenes really does make the most of cinema. Factory smoke billows over head during the dramatic introduction to Gabe (Mykelti Williamson), Troy’s mentally-handicapped brother, there is an emotional quality that could not be obtained from a simple stage set.

But at its heart, the film is still very much a play, and one reverently adapted: Washington has left out nothing of the original. This means that Fences is nearly two hours and twenty minutes of dialogue. There will be people for whom recent film The Magnificent Seven will provide a better dose of their hero: Denzel Washington, barely saying a word, riding a horse, shooting twin revolvers. For those who can take a sustained piece of wrenching drama, however, Fences delivers the goods with hard-to-match intensity.