Gold film review 3 Gold film review Matthew Robinson
All that glitters is not gold! Yes, rest assured – you'll hear this expression in respect to Stephan Gaghan’s latest endeavour many times over. While it's undeniable that Gaghan is a tremendously talented director and screenwriter (he did bring us Syriana after all), he missed the mark with Gold.

The film opens in Reno. Matthew McConaughey plays Kenny Wells, an alcohol-fuelled, down-on-his-luck businessman with a potbelly, a receding hairline, and a mining company inherited from his father. In enthusiastic fashion, and in an effort to live up to his father, Wells hops on a plane to meet with reputable geologist, Michael Acosta (played by Edgar Ramírez) in the hopes of finding gold in Indonesia’s uncharted jungles.

Down to his last penny and bed-ridden with malaria, Wells wakes up to the news that Acosta, along with the Indonesian miners the pair have commissioned, supposedly find a massive gold deposit. Soon, the company’s stock price begins to soar and intimidating New York firms who want to partake in the extraction of the precious metals begin to take notice. The plot unfolds predictably from this point on. 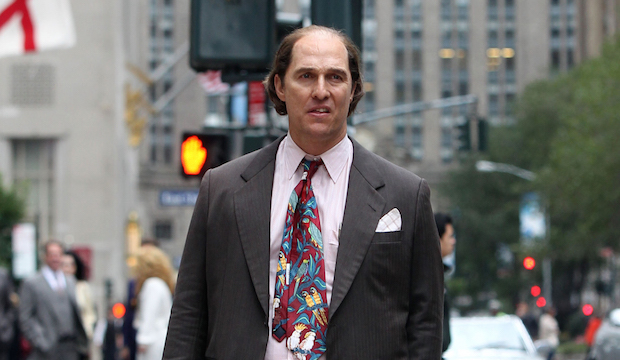 While the film attempts to sell audiences on Wells’ love for his profession, McConaughey – who says Kenny Wells was one of the most favorite characters he’s played – instead comes off as a desperado who so miserably just wants to be rich. The films most shining scenes are those that focus on Wells’ relationship with Acosta and his love interest Kay, played by Bryce Dallas Howard. Although Wells is an unappealing profiteer who oozes nouveau riche, you can’t help but feel sympathetic towards him and his cluelessness as the bigger and badder wolves of Wall Street try to outsmart him (which isn’t difficult) to gain access to his new-found wealth.

Gold did have a lot of potential to be a great film; its storyline was interesting, and a prominent cast of charismatic actors were commissioned to play the lead roles. But while it's entertaining, Gold fails to capitalise on any of its selling points – or, rather, it relies solely on these redeeming factors.

The story is told lazily and is reminiscent (not in a good way) of more vibrant, award-winning films such as American Hustle, The Wolf of Wall Street, and The Big Short. Although enjoyable at times, Gold is simply unmemorable.

In cinemas this weekend: Noah Baumbach vs the Dardenne brothers
Sign up to CW’s newsletter
By entering my email I agree to the CultureWhisper Privacy Policy (we won`t share data & you can unsubscribe anytime).