That’s not quite true. There are many great ’90s classics that have their singularity written into their ending. Thelma and Louise, shooting off the cliff in their 1966 Thunderbird, would have to have landed on a pretty resilient bouncy castle in order to come back twenty years later; similarly wild contrivances would be needed to regroup the protagonists of, say, Pulp Fiction, Heat, The Sixth Sense, and The Usual Suspects. But everything else, it seems, from Toy Story to The Silence of the Lambs, has been thoroughly sequelised. And now Trainspotting (1996).

In a way, it’s a miracle it didn’t happen sooner. Danny Boyle’s energetic, stylised film about heroin-addicts in Edinburgh ended with protagonist Renton (Ewan McGregor) running off into the horizon with a sports bag full of drug-money stolen from his three frenemies: Spud, Begbie, and Sick Boy. It’s a real peach of an ending, neither a cliff-hanger nor a neat resolution, and only incredible artistic restraint (they say) or a long bitter grudge between director and lead actor (everyone else says) could have delayed a new film from sprouting out the ripeness of the old one. 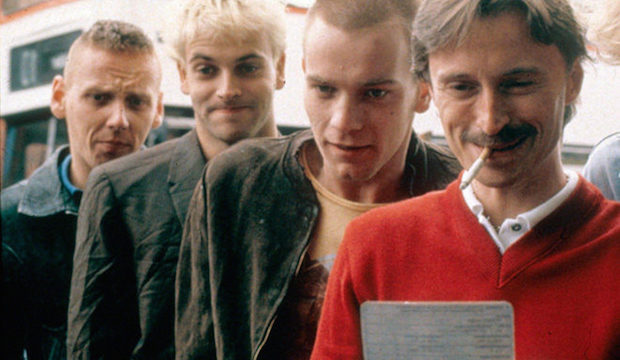 As with all sequels, the actual story of T2 is secondary to the fact of the film’s existence. McGregor’s Renton returns to Edinburgh, primarily to instigate a plot for Boyle’s film, and finds himself in the company of the aforementioned frenemies. The slim gleamy-eyed hedonists of Trainspotting have become disillusioned sad-sacks – a transformation would have happened anyway, of course, but the fact that Renton stole their share of the loot means that he denied them their fresh starts in order to finance his own.

This is a promising dynamic that Boyle makes good dramatic and comedic use of, and there’s no denying that T2 is a very entertaining film. There’s certainly no reason to expect anything more than that – to expect, for instance, another zeitgeist-capturing classic.

It’s a phenomenal achievement for any director to make even one – as Boyle did with Trainspotting – so to achieve it a second time, especially with a sequel to a previous zeitgeist-capturing film, is as close to impossible as you can get. It’s like trying to hit bulls-eye with the same arrow but at ten times the distance. It doesn’t matter how good a marksman you are.

Yes, T2 Trainspotting is basically Trainspotting fan fiction. But it's also moving, amusing, and occasionally thrilling – while being a sequel. Applause where it’s due.

The next Doctor Who: everything you need to know about Jodie Whittaker
Sign up to CW’s newsletter
By entering my email I agree to the CultureWhisper Privacy Policy (we won`t share data & you can unsubscribe anytime).
3