With Loving, talented director Jeff Nichols (Mud, Take Shelter) has made a superior film about an important story

5 CW readers are interested
Loving film review 5 Loving film review Matthew Robinson
In 1958, Mildred and Richard Loving were married in Washington, D.C. This wouldn’t have been such a problem for them if their relationship hadn’t been interracial, and if they hadn’t returned to live in Virginia, a state that had stringent anti-miscegenation laws.

Arrested and charged, the Lovings were effectively exiled until the American Civil Liberties Union took up their case. It shouldn’t be a spoiler to say that the racist statutes were repealed, and the couple ended up legally married in their home state.

To the endless credit of director Jeff Nichols, Loving never tries to exaggerate the drama of its story. Nichols understands that the best way to convey the significance of the Loving v. Virginia case is not through thunderous rhetoric – that kind of persuasive performance is best left to the lawyers. Instead, Loving does what movies do best: it shows rather than tells.

In other words, it gives us the love of the Lovings. Their marriage – with its quiet ecstasies, its difficulties, its long ruts and its abiding friendship – is centre-stage for most of the film, with the Civil Rights Movement relegated to background noise (‘might as well be halfway around the world’, sighs Mildred, watching marches on TV) and the climactic legal confrontation not even shown onscreen.

This commitment to the perspective of its protagonists extends to the anxieties of living in their world. The disregard of their marriage certificate, and the disappointed anger of the punitive legal forces, seem both bewilderingly unfair and miserably inevitable, as they must have done to the unworldly but realistic Lovings. And when the Lovings defy the law, the threat of legal or even violent reprisal is everywhere. Without ever showing a hangman’s noose or a bloodied black face, Nichols instils in his audience the appropriate sense of paranoia. Just a car appearing at the end of a long dirt track can seem horribly ominous. 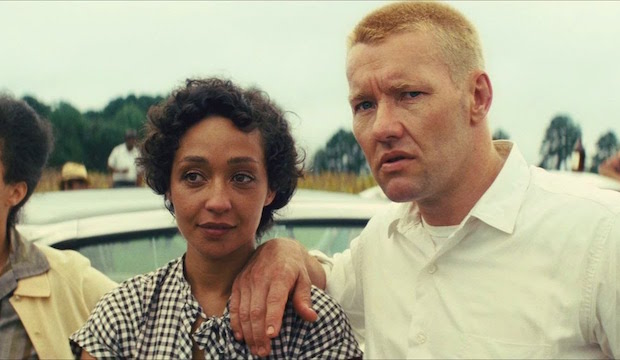 In this way, Nichols presents the ultimate reason why Loving v. Virginia was important: it allowed people like Mildred and Richard to live in love, and without fear. Loving makes this simple, honourable ideal into flesh and blood by doing the same for its protagonists. Nichols writes them convincingly, and the actors more than hold up their end.

Ruth Negga has been justly nominated for an Academy Award for her performance as the wistful, canny Mildred; and while Richard is so shy that he seems to shrink from Nichols’ camera, Joel Edgerton’s portrayal of this gentle, near-mute, and devoted man is possibly the best thing in this excellent film. Edgerton also perfectly delivers the short line that will destroy you. You’ll know it when you hear it.

Nichols and his actors never give in to the temptation to caricature or otherwise amplify, a decision that strengthens the political value of this sometimes apolitical-seeming film. Instead, they do the difficult, complex work of being truthful. Loving is the film that other films need to be.