Dorothy is doing the work of a supervisor without the matching pay; Mary has to make the legal case for becoming an engineer; and Katherine, widowed with kids, has been called up to crunch numbers for a team trying to put astronaut John Glenn in orbit.

Facing the disapproval and distaste of their employers and colleagues, and the indignity of being undervalued while being told to be grateful, the three women are nevertheless key to NASA’s attempts to put a man into orbit. America needs to overthrow its prejudices to succeed (or, more specifically, to beat the Russians at their own game). As one character puts it: ‘We all get there together or we don’t get there at all.'

Like The Founder, also now in cinemas, Hidden Figures looks to the middle of the last century to configure a modern audience’s understanding of contemporary America. Like that film, it’s likeable, funny, and completely predictable. It’s almost exactly the kind of film that Jeff Nichols managed to avoid making with Loving, a race-relations film also set in mid-century Virginia. In short, Hidden Figures is the movie where ‘fifteen minutes in you know exactly what it is’. 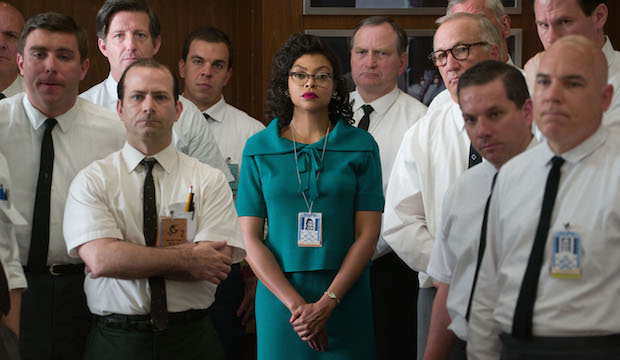 There’s no examination, as there was in Loving, of the mind-set behind prejudice. Jim Parsons (The Big Bang Theory) and Kirsten Dunst, playing particularly recalcitrant NASA employees, just spend the film looking a bit dour: it’s as if they simply weren’t upbeat enough to embrace social change.

Then there’s the way they’re balanced out by Kevin Costner’s Al Harrison, NASA’s Space Task Group director, a composite character that assuages what little white guilt the film builds up. When Harrison finds out that Katherine has been forced to make a 40-minute round-trip to use the ‘coloured women’ bathroom across campus, he immediately smashes down the offending sign with a crowbar, watched by an appreciative crowd.

This stretches credulity a bit too far. Did Harrison not know that the bathrooms were segregated? Or did it just not matter to him until it made one of his team-members late?

But the moment that instigates this scene, in which Katherine vents her rage and sadness at the absurdity of having to use a ‘coloured’ coffee dispenser, is well-earned and genuinely cathartic. Emotionally delivered by Henson, it’s one of the real pleasures of Hidden Figures, a film that transforms the real-world struggles of exceptional individuals into a sunny film about pluck and endurance.

In cinemas this weekend: Steven Spielberg and Nan Goldin tell their creative truths
Sign up to CW’s newsletter
By entering my email I agree to the CultureWhisper Privacy Policy (we won`t share data & you can unsubscribe anytime).