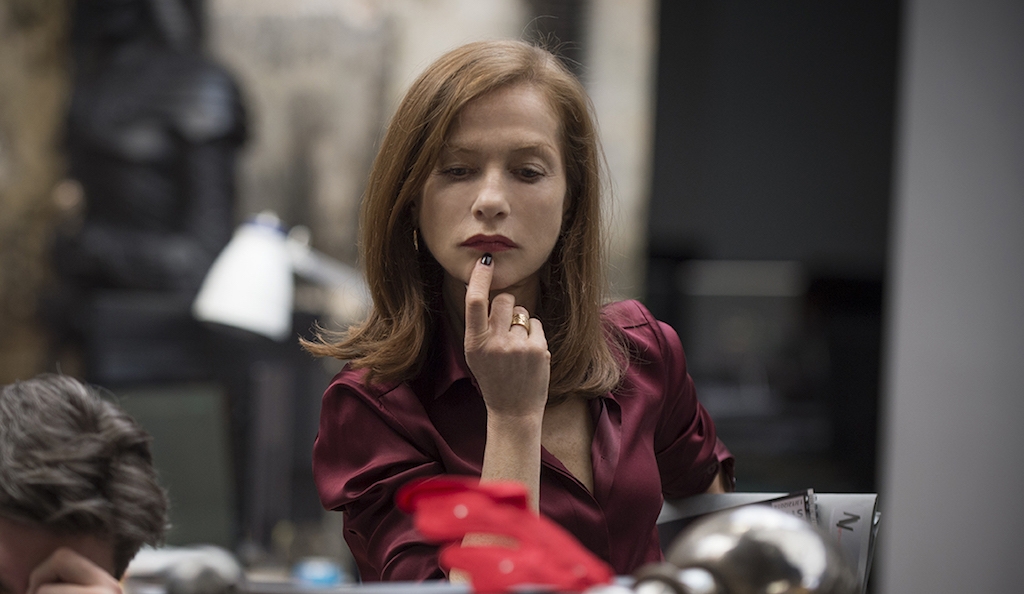 Isabelle Huppert – Elle film 2017
Elle is a widely-applauded black-comedy about a rape. You probably already knew this.

Director Paul Verhoeven’s film has been met with the kind of uniformly rapturous critical reception that most recently met Moonlight and Manchester By the Sea. What’s interesting, considering the critical response, is how questionable Elle is.

It’s not a drama that explores the emotional fallout of being raped, and it’s not a satire on a society that condemns rape while subjugating women in myriad other ways. It’s a thriller that engineers its thrills from the shocking, appalling nature of rape. Most publications have called it ‘audacious’, us included.

The set-up is this: Michèle, the protagonist played by Isabelle Huppert, is raped in her own home by a masked intruder; a series of anonymous harassments make it increasingly apparent that the rapist is someone Michèle knows.

On paper it sounds exploitative and trashy. Onscreen, however, it’s one of the slyest, funniest, sharpest films we’ve seen for a while. It blends tones and genres together into something completely disarming. Not one of its 130 minutes is boring. It comes at you with several different subjects in quick succession, gets its hits in obliquely, and intersperses them with winks and nose-tweaks. You leave the cinema feeling both winded and wound-up.

Which is to say that Verhoeven’s film is entertaining, and entertaining in a sophisticated way. It undermines your expectations and then plays off your reactions. This is a particularly pleasurable experience for film critics, who experience a deep, ontological weariness at having their cinematic expectations met on a daily basis. When they watched Elle and found it watching back, a ruthless gleam in its eye, it was love at first sight.

There’s nothing wrong with this kind of reaction. We had it. But it’s a first reaction, an initial and visceral response to the film’s hypnotic plumage. It gives little time to reflect on the implications: the implications of its creation, and of its reception. And such reflection is important, especially when Elle treats rape in the way it does, and in the current political/societal/cultural climate.

We’re not going to spoil Elle for you by discussing the plot. Instead, here are the questions that we wished we’d asked ourselves during our first viewing:

Paul Verhoeven made Basic Instinct (1992) and Showgirls (1995). What does his creative involvement in these films say about his understanding and attitude toward female characters?

Screenwriter David Birke is known for his work on the kinds of serial-killer movies that make Verhoeven’s oeuvre look positively classy. Pretty much the same question as above.

Does Michèle actually demonstrate strength, other than through stoicism? Is the film’s celebration of post-rape stoicism empowering or problematic? What about the ending – did Michèle actually engineer that denouement, as is implied? If she didn’t, what are the implications for her response to her own rape?

Is Michèle’s backstory intended, by Birke, to explain her reaction to the rape? Does it explain it, in any meaningful human way? Do you believe that Michèle is psychologically credible? If not, does that matter?

Have Birke or novelist Dijan ever spoken to a rape victim? Do they need to? Is that a moral or aesthetic requirement for fiction? What about if the film is being hailed as ‘empowering’ and feminist?

Were we actually moved by Elle? Did we, while or after watching it, have any kind of emotional response to its story or characters? Was our response anything more than a kind of sugar-rush of surprise and excitement? Is Elle great art? Or is it a hollow, regrettable, post-modern schlock-a-thon given a veneer of respectability by Huppert's thespian credentials? That last question sounds rhetorical, but we genuinely don't know.