A star-studded cast featuring Marion Cotillard and Charlotte Gainsborough can’t save the latest from Arnaud Desplechin, Ismael's Ghosts from partially sinking under the weight of symbolism-induced hollowness

Ismael’s Ghosts review 2 Ismael’s Ghosts review Helena Kealey
On paper, choosing Ismael’s Ghosts as the opening film for the 70th Cannes Festival was a safe bet: the director, French auteur Arnaud Desplechin (A Christmas Tale), is a long-time friend of the prestigious event; the cast is appropriately glamorous, with a central trio (Mathieu Amalric, Charlotte Gainsbourg and Marion Cotillard) that is tailor-made for the red carpet; and, with its apparent narrative focus on a film-maker and his art, it’s an ideal way to kick off the anniversary. Alas, the result is a surprisingly cold, mechanical affair, driven by hollow symbolisms.

The main character, Amalric’s Ismael, is working on a film based on his brother’s life, and retreats to his usual seaside holiday spot for some thinking, accompanied by his partner Sylvia (Gainsbourg). While ostensibly happy with her, Ismael is still haunted by the absence of his wife Carlotta (Cotillard), who disappeared 20 years ago and is officially declared dead. All of a sudden she resurfaces, and her impact on Ismael’s life appears set to have devastating consequences.

All three actors, ably assisted by Louis Garrel and Italian star Alba Rohrwacher in sequences showcasing the (much more interesting) film within the film, deliver emotionally naked and largely compelling performances, although the uneven direction occasionally fails to ground some of Amalric’s less subtle moments. With names and faces plucked from previous Desplechin films, Ismael’s Ghosts is as much a summation of the director’s own work as it is a standalone piece of material, albeit with an obsession for atmosphere over plot that compromises the story’s emotional core.

Most frustratingly, the film-making aspect itself is largely kept in the background, an element that is particularly disappointing in light of the film’s place in the Cannes schedule. While the choice makes sense considering the relationship between festival and film-maker (a bond that needed a little mending, as those in the know will tell you), it remains baffling in terms of kicking off the world’s most important cinematic event. 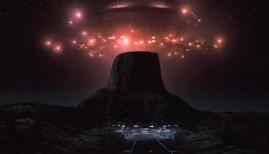 Close Encounters of the Third Kind in Concert, Royal Albert Hall
Sign up to CW’s newsletter
By entering my email I agree to the CultureWhisper Privacy Policy (we won`t share data & you can unsubscribe anytime).