'You despised I Stand Alone. You hated Irreversible. You loathed Enter the Void. You cursed Love. Now try Climax.' Thus spoke Gaspar Noé on the brilliantly self-aware and self-glorifying poster for Climax, his fifth feature film. Sex, death, time, drugs and self-destructive behaviour have been a constant of the director’s universe from the very beginning, and all those ingredients are mixed together for maximum effect in a 90-minute exercise in self-aggrandising that is blatantly, shamelessly the brainchild of its director, for better or worse. 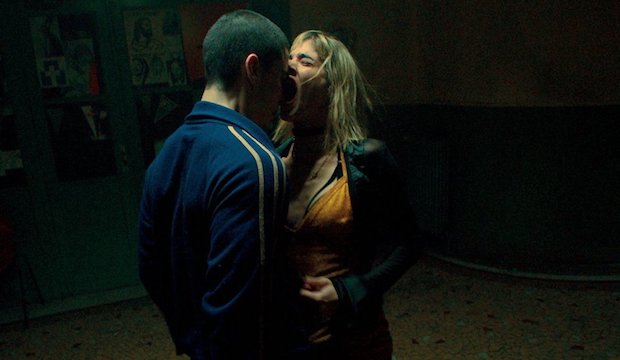 Set in 1996, the film takes place (almost) entirely in a single location, within the confines of an isolated boarding school in the woods. The closed-down building is where 20 urban dancers meet to rehearse for three days and share one last dance together. Things get out of hand thanks to a bowl of sangria, which appears to have been tampered with. Soon enough, madness and paranoia ensue, as everyone gives in to their most primal instincts.

Shot largely in long takes, based on a single-page outline and featuring improvised dialogue, Climax is typical Noé, a long, strange trip (in every sense of the word), fuelled partly by the director’s obsessions but largely by his ego. Each feat of stylistic bravura gets increasingly narcissistic, a showcase of cinematic flair that accurately depicts the frenzy of extreme experiences but also undercuts any emotional content the story might have had, as none of the characters are given enough time or material to truly make an impact.

Thrown into the mix are also various title cards, expressing thoughts about life and death, and an Irreversible-style beginning with part of the end credits playing first. Climax is therefore also a meditation on Noé’s work as a whole, not unlike another film that also premiered at the 2018 Cannes Festival, Lars von Trier’s The House that Jack Built. But whereas the Danish auteur is interested in the humanity beneath the philosophy and provocation, Noé appears to disregard the human aspect completely, leaving us with yet another hollow exercise in style that is effectively outdone by its own poster. At least said piece of advertisement is aware of the filmmaker’s brand, and issued a fair warning: Noé sceptics will have little reason to seek this one out.