In The Nun, director Corin Hardy takes on the sinister demon Valak from the Conjuring franchise. Unfortunately, there's not much to be scared of

The Nun film review 2 The Nun film review Euan Franklin
In a recent featurette with James Wan, the original mind behind the Conjuring movies, he said 'they have a superhero universe, why can’t we do that in the horror world?'. The Nun answers why not. After a bloated hype-campaign with endless trailers showing Taissa Farmiga (American Horror Story) walking in a white habit unknowingly pursued by a nun-shaped silhouette, the fifth installment and third spinoff in The Conjuring franchise is finally playing in cinemas.

TRY CULTURE WHISPER
Receive free tickets & insider tips to unlock the best of London — direct to your inbox
Set in 1952, nineteen years before the events of The Conjuring, the priest and miracle-hunter Father Burke (Demián Bichir) is assigned by the Vatican to investigate a nun’s suicide outside the St. Carta Abbey in Romania, which is rumoured to have an unholy presence. He is sent with Sister Irene (Farmiga), a progressive nun-in-training who’s endured uncomfortable visions since childhood. In and around the Abbey, they are met with the presence of the demon Valak (Bonnie Aarons), introduced in The Conjuring 2, who takes the form of a disheveled monster-nun.

The Nun starts like a homage to classic horror. It’s enjoyable to see scared horses cease when nearing the Abbey, like Dracula, and the ice-house in which the local comic-relief Frenchie (Jonas Bloquet) stores the dead nun, reminiscent of M.R. James. The Abbey itself is also nicely designed for horror with stone floors shrouded in mist, hundreds of crucifixes hanging from the ceiling, and a lack of electricity which blankets everything in a thick darkness. And this works well with Maxime Alexandre’s drifty and well-coordinated visuals that add some suspense to the scares. 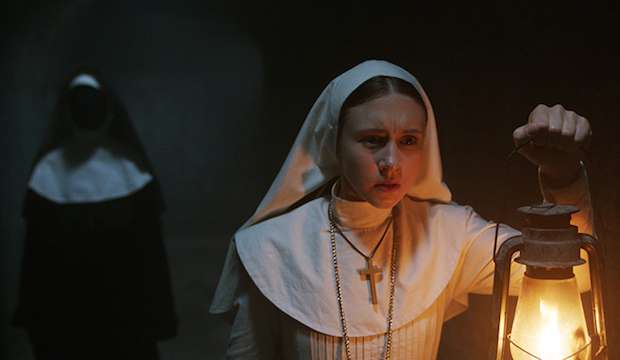 However, despite the intensity and imagination behind the scares, there’s not much to be scared of – mainly because, unlike the hype, the build-ups are tiny. It’s just two pious detectives taking a tour of an old church and scary stuff happens and that’s it, with very little in the way of plot- or character-development. Even the connection to The Conjuring, revealed in the closing minutes, is underdeveloped and stuck on the end to make The Nun feel important to the overall franchise.

The Nun is like an excited first-draft filled with nightmarish images and no idea how to tie them together. Screenwriter Gary Dauberman (It, the Annabelle spinoffs) has fun on occasion – especially through the character of Frenchie, who offers some light laughs among monotonous evils. But even Valak looks bored in her own story, and she’s nowhere near as frightening as her entrance in The Conjuring 2. And when the main villain doesn’t elicit so much as a light gasp, it’s an experience as dry as the Nun’s weathered face.