With Yardie, first-time director Idris Elba proves that London is an ever-expanding concrete labyrinth of worlds and stories

Yardie film review 3 Yardie film review Ella Kemp
In movies big and small, there are a million perspectives of London – you’d have thought there was nothing new to explore. But resident Hackney heartthrob Idris Elba has done it with his directorial debut Yardie, proving that London is an ever-expanding, concrete labyrinth of worlds and stories.

Yardie follows D (Aml Ameen), a drug peddler from Kingston, Jamaica, who’s assigned to London for a cocaine deal. He’s still mourning the death of his brother Jerry (Everaldo Creary), shot after trying to bring peace between rival gangs. He finds out that his brother’s killer is living in London, and has a chance for revenge. But when the cocaine deal falters, D is hunted through Hackney and he seeks shelter in a flat belonging to his old girlfriend, Yvonne (Shantol Jackson).

As a director, Elba never slows down. He creates a constant, rhythmic pace that feels ripped out of a nouvelle vague crime thriller. It’s a hazy, impulsive experience, reflecting D’s kinetic personality – always moving, never stopping. However, this style isn’t as effective as other recent peripatetic movies (such as last year’s Good Time). It’s even too fast at times. 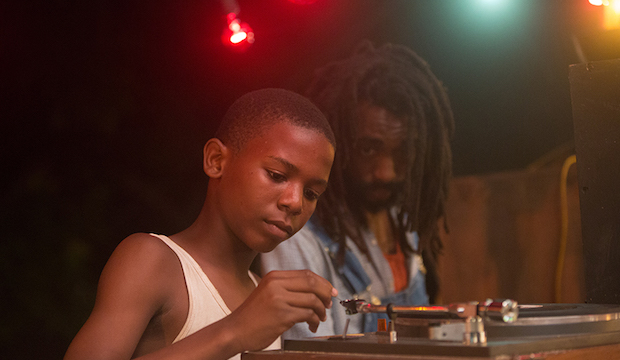 The characters aren’t given much space to explain themselves. We’re not sure why D is so impulsive, crossing into stupidity; or why the coke-addicted villain (Stephen Graham) drifts between London and Jamaican accents, or how some secondary characters fit into the arc of the story. Violent editing makes an effort to maintain this electric pulse, but the result is a bit of a fumble.

This can almost be ignored, as Elba plunges the viewer into the gritty, grimy, music-infused environment of ’80s London within Afro-Caribbean communities. The dialogue (written by Brock Norman Brock and Martin Stellman) doesn’t strive to be accessible to those who might be unfamiliar with such communities, which is a brave choice. The words and sounds are beautifully authentic, rarely seen in Western movies to that extent – it's reminiscent of Marlon James’s Booker Prize-winning novel A Brief History of Seven Killings in the way the Jamaican dialect submerges its audience with that world and that culture.

Yardie has its issues, some more explosive than others, but the world centred on Hackney and Jamaica is endlessly fascinating and the story just about works. Elba has a raw, stylistic knack for directing – and although Yardie isn’t a perfect debut, it’s exciting to imagine what he could do next.