Christopher Robin film review 3 Christopher Robin film review Laura de Lisle
Sooner or later, we have to face the dreaded reality of adulthood. Playtime ceases, work starts coming first, and the wild imagination you once had fades away like your favourite imaginary friend Bing Bong in Inside Out. There’s a pressure to be mature, almost robotic, in order to conform. In Christopher Robin, the latest in a string of live-action Disney remakes, Winnie the Pooh’s best (human) friend grows up to be a working, conforming, monotonous adult.

Christopher (Ewan McGregor), a recent veteran of the Second World War, works for a luggage company. He’s informed by a classically pompous Mark Gatiss that costs must be cut by 20%, dissolving Christopher’s plans to spend the weekend in Sussex with his wife Evelyn (Hayley Atwell) and daughter Madeline (Bronte Carmichael). But when the silly old bear Winnie the Pooh (Jim Cummings, who’s voiced Pooh since 1988) stumbles out of the Hundred Acre Wood and outside the Robin household in London, Christopher is forced to question what’s most important in his adult life.

Strangely for a kid’s film, there’s a subtle sense of reality underlying the story – despite being about a man’s adventures with stuffed animals. The bleak, high-contrast cinematography from Matthias Koenigswieser suggests that Christopher’s world, fantastic as it might seem, is suffering a traumatic hangover from the war that preceded it. Although there’s not much evidence of a recovering, post-war Britain, there’s a certain psychological impact shown in the imagery. It’s a different look and feel from the colourful joy of Paddington, despite sharing the same VFX company (Framestore). Christopher has become entrenched into the bureaucracy of his work life, and he’s forgotten to have fun – Pooh and friends help him to rediscover that childish joy. 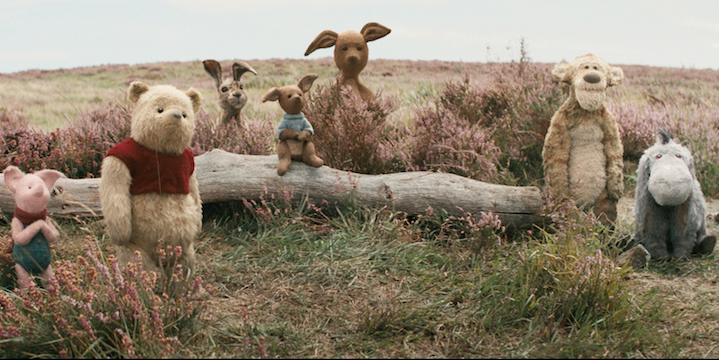 Owl, Rabbit, Kanga and Roo are sadly marginalised in favour of Pooh, Piglet, Tigger and Eeyore

Although this is a fascinating path for a Disney film to take, too much focus is placed on the reality and not enough time is spent in the fantasy. We’re given decent slices of Pooh, the egocentric Tigger (also Cummings), the terrified Piglet (Nick Mohammed) and the hilariously existential Eeyore (Brad Garrett) – but Owl, Rabbit, Kanga, and Roo feel left out for much of the film. The visit to the Hundred Acre Wood was also too short, with writers Alex Ross Perry, Tom McCarthy and Allison Schroeder feeling that a dim and drab London was more appealing. Although Christopher’s job is key to his character, it’s not what parents pay a family ticket for.

But Christopher Robin has charm and a faint poignancy that’s more refreshing than Disney’s other less-than-good remakes. The story wanes in the second half and Christopher’s wife and daughter aren’t given enough screen time, but it’s still a wondrously dreamy adventure with Pooh and (some of) the gang. The film isn’t too emotional or exciting (on a much smaller scale than Paddington), but you’ll have a lovely time regardless.