Scare yourself with Ozark, be outraged with Insatiable and laugh at Disenchantment: what to watch on Netflix August 2018 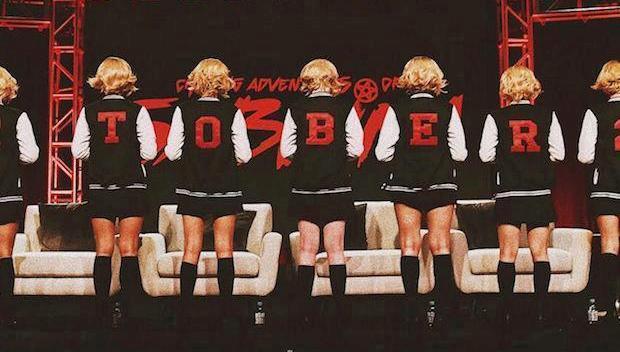 Gritty crime drama Ozark returns for a much-anticipated second season at the end of August, as the Byrdes slip deeper and deeper into the world of the Mexican cartel. With the stakes rising and the demands of business increasing, will Marty and Wendy be able to recover their relationship?

For our review of the first series click here.

Bridget is a 40-something-year-old woman whose mother has gone from fussing about Mr Darcy and his wife of a 'cruel race', to pleading with Bridget to get something cooking in her oven, with or without a man to provide the unbaked goods. Lo-and-behold she gets pregnant, but unfortunately Bridget doesn't know who the baby's father is. Is it Jack (Patrick Dempsey) the hunky techy millionaire she met at a festival, stumbled into a tent with, and then shagged? Or is it lovely, dependable, busy and successful Mark Darcy (Colin Firth) that we know and love?

New to Netflix this August is supernatural teen love story The Innocents, which tells the tale of a young couple whose decision to run away from their repressive families and start a life in London, is blighted by an unexpected discovery. Moody, intense and fantastical – this eight-part drama has potential.

Also coming to Netflix on 24 August is Ghoul – an Indian horror series from the makers of Insidious and Get Out. When a prisoner arrives at a remote detention camp, he uses his demonic powers to turn the tables on his interrogators, revealing their darkest and most shameful secrets. This Hindi-horror looks seriously chilling, so make sure you've got a sturdy sofa to jump behind.

Matt Groening brought us a cartoon about the present in The Simpsons, the future in Futurama, and now, with Disenchantment, he will plunge us into the past – or the medieval kingdom of Dreamland to be more specific. This ten-part series looks to bear the marks, both visually and comedically, of Groening's previous work. So given his enviable track record, there's every chance this will be comedy gold.

From the director of Legally Blonde, comes the nightmarish tale of a horrendous mother-in-law who torments her daughter-in-law to be. Sure, it's not as good as Legally Blonde, but it's got Jennifer Lopez and Jane Fonda in it, so go and grab the popcorn anyway.

Fraught with controversy, Insatiable is the new teen drama that has been accused of fat shaming. This twisted revenge comedy follows Patty (Debby Ryan), a girl who, having always been bullied for her weight, finds herself suddenly thin, and sets out to get back at everyone who ever made her feel bad.

The original Jason Bourne is back. The movie that launched the enormous Hollywood Blockbuster franchise is – arguably – the best. Love, death, conspiracy and plenty of action: what's not to like?

All About the Washington's
UK release date: 10 August

All About the Washingtons is an autobiographical, scripted family sit-com starring Joseph Simmons (aka. Rev. Run of Run-DMC fame) and his wife Justine Simmons playing fictionalised versions of themselves, Joey and Justine Washington. The series follows the aftermath of Joey's retirement from hip-hop, which sees Justine take the opportunity to pursue her own career, leaving Joey to keep the house and the kids in order.

Your honeymoon is supposed to be the most romantic trip of your life, so you can imagine her disappointment when a young executive (Kristen Bell), is forced to spend it with her dad. Stuck on a cruise together, father and daughter are forced to do some serious soul-searching, and to go on a different type of journey to that which she was expecting.

'Divergents threaten the system. We won't be safe until they're removed.' Set in a dystopian future where the leader (Kate Winslet) is hellbent on destroying all the Divergents, Prior (Shailene Woodley) discovers she doesn't belong in any one group and must disguise herself to survive, meeting a mysterious man along the way. The film is based on the best-selling book series by Veronica Roth.

Sure – die-hard Pride and Prejudice fans might argue that the Keira Knightley adaptation wasn't a scratch on the BBC miniseries with Colin Firth. But it's an awful lot shorter and full of charming moments as Elizabeth Bennet falls for the elusive Mr Darcy. And it's on Netflix.

Amy's life looks good. She's got a great marriage, high-achieving children, a beautiful life and a career. But she's exhausted. Fed up and furious, she and two other stressed-out 'moms' go wild. This is The Hangover for women, apparently.