2 CW readers are interested
House of Cards final season review 3 House of Cards final season review Daniel Lewis
It’s a hard job, replacing a king. That’s what both Frank Underwood and Kevin Spacey were before being disgraced and buried. Robin Wright now takes the lead and the presidency in House of Cards as Claire Hale, formerly Underwood. But despite Wright shining a more potent and engaging light on the character she’s played for the past five years, Netflix's first Original Series ends on a rather flat note.

Claire is now the President, after deceiving her husband. He has died under mysterious circumstances, and she begins to shed his influence. But Shepherd Unlimited, a massive corporation headed by siblings Bill (Greg Kinnear) and Annette (Diane Lane), holds considerable influence over the White House – proving detrimental to Claire’s plans.

It’s a striking start: a stomach-churning dictation of various violent messages received because of a woman being President. Claire demands they be read to her, statements like ‘God never intended a woman to rule this land’, threats such as ‘I’d like to fry her eyeballs’, and repeated uses of the ‘c-word’.

The series brilliantly captures this truth of misogyny plastered everywhere. Often, the story flashes back to instances in Claire’s childhood where she’s had to face sexism and misogyny first hand. Showrunners Melissa Gibson and Frank Pugliese thread a feministic plight within the story from discussions about Simon de Beauvoir to transparent sexists like Bill Shepherd saying: 'No one loves women more than me!' 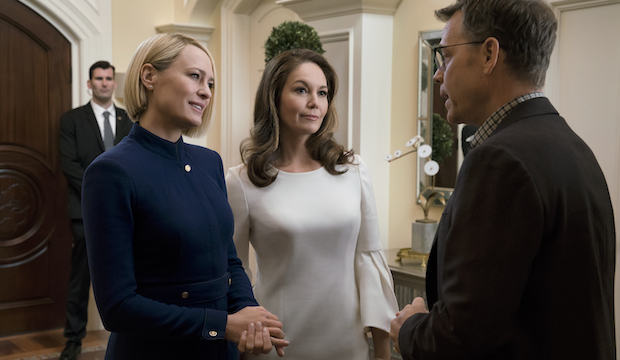 However, this final season doesn’t reach the weight, deception or darkness bled across previous seasons. Claire is trying to separate herself from Frank, not wishing to make the same mistakes he did. The violence and vehemence is greatly reduced, which makes the stories less watchable. She is devious and horrific, but the body count is too low.

Although the Shepherds represent a kind of Trumpish, capitalistic influence in the White House – an intriguing concept considering the current political climate – they feel extraneous, something new to fill up the script. It’s a fatal attribute of final seasons: introducing more characters instead of drawing out the old ones. Doug Stamper (Michael Kelly) reaps greater rewards, as do the journalists trying to take down Claire – but despite their journeys having a few exciting moments, even they become tired and predictable.

House of Cards doesn’t reach an explosive or spirit-crushing conclusion, leaving many open ends desperate to be tied up - the final episode feeling more like a halfway point. The scripts wield some good ideas, many reflecting current issues (capitalistic government, corruption of internet privacy etc.), but they’re left unfulfilled. Unlike Wright’s chilling turns to the camera, the stories can’t pull our attention so easily.