In episode four of Doctor Who, Jodie Whittaker is up against some fierce and massive spiders crawling rampant in Sheffield

Doctor Who episode 4 review 3 Doctor Who episode 4 review Euan Franklin
Halloween is lurking ominously around the corner, and it’s probably appropriate for this weekend’s TV to be filled with spine-scratching creepy crawlies – first in the new supernatural Netflix series Chilling Adventures of Sabrina, and now in episode four of Doctor Who. Titled Arachnids in the UK, some big, massive, horrible spiders spindle into the laps of The Doctor and her new best friends.

The Doctor (Jodie Whittaker) and companions Yaz (Mandip Gill), Ryan (Tosin Cole), and Graham (Bradley Walsh) return to the delights of Sheffield. But something strange is happening in the city. Through the doors of a hotel-in-progress owned by wealthy capitalist Robertson (Chris Noth), thick cobwebs are strewn in the rooms. Same with the flat next door but one to Yaz. Same with Graham’s place. And all are cast by (you guessed it!) those big, massive, horrible arachnids.

Initially, there’s a nice horror movie quality to the episode. We start off with spectral steadicam shots winding around the hotel at carpet level, lights flickering – a strong reminder of the Overlook Hotel in The Shining. The fear is racked up even more for arachnophobes as clusters of these oversized spiders crawl around with violent intentions (we think), moving in that disgusting way that they do.

The effects team did exceedingly well in their creature design, which, despite being CGI, are frightfully convincing in their movement. Although there’s very little character in the said creatures, they’re crafted to be both natural and terrifying at the same time. 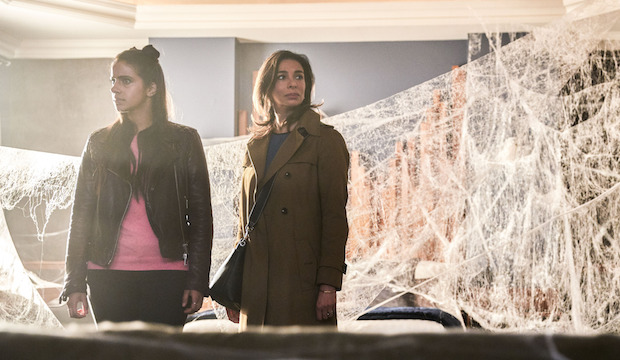 Unfortunately, that B-movie horror concept – done to better effect in the phenomenally stupid 2002 film Eight-Legged Freaks – isn’t fulfilled to its ridiculous potential. In fact, it’s not entirely clear what tone that writer Chris Chibnall or director Sallie Aprahamian were going for. It sometimes feels that a lot of the horror was cut out to protect the younger audience, and although there are some great nightmarish images – humans being mummified by spiders’ webs being a strong one – they’re not enough.

The spiders, despite looking horrible, aren’t overly dangerous (with the exception of a few deaths no one cared about) and it’s hard to know whether The Doctor actually sorted out the problem by the end. Despite Chibnall’s desire for ten standalone episodes, Arachnids in the UK might’ve benefitted from a two-episode story.

There are some funny scenes that graze the political climate. Robertson is essentially Donald Trump, with Noth performing his character like an Alec Baldwin SNL sketch, and it’s fun to watch him clash with The Doctor. But he’s not all bad – despite being very pro-gun and sacking anyone who annoys him, he still hates the real Trump (‘please… don’t mention that name’).

Arachnids in the UK is slightly disappointing, especially considering the episode that came before it. It was inevitable for a weaker episode to stumble along – let’s hope this is the worst of it.